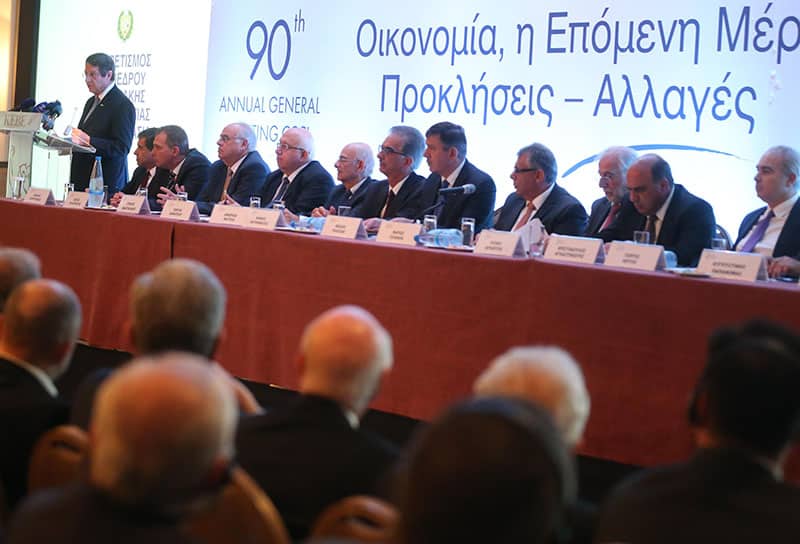 The Cyprus chamber of commerce and industry (Keve) elected Christodoulos Angastiniotis as its new chief at its annual general assembly on Tuesday, following the departure of Phidias Pilides, who served the maximum allowed two terms at the chamber’s helm over the last six years.

Addressing the assembly, President Nicos Anastasiades praised the “work [the Keve] does and its positive contribution to the progress our country is currently recording”.

“Recently, we tabled the last budget of this administration,” he said.

“It is the fourth consecutive balanced budget, which will follow a primary surplus of €665 million we are expecting this year.”

Anastasiades noted the recovery of the once-teetering banking sector, which managed to attract a total €1.4 billion in foreign investment following the 2013 low-point.

“There was no magic formula for success,” the president said.

Anastasiades congratulated the departing chairman for his service.

“Phidias may be passing on the baton today, but his contribution – as chairman, because I am certain he still has a lot to give – will remain widely recognised and indelible,” he said.

From the podium, the outgoing chief said the chamber’s key goal must be strengthening Cyprus’ position in the global competitiveness scale.

He said this effort should include boosting the state’s efficiency, expediting reforms, strengthening transparency, speeding up the dispensing of justice and decoupling the state from partisan politics.