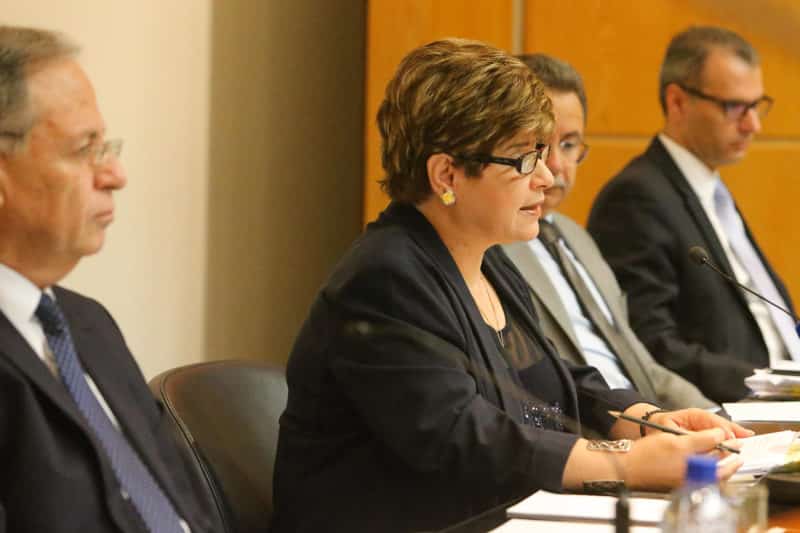 Cypriot banks need to take more radical action to reduce their mountain of delinquent loans amid a slowdown in restructurings even as economic growth is expected to reach 4 per cent this year, Central Bank of Cyprus’ governor Chrystalla Georghadji said on Tuesday.

She told MPs that the Single Supervisory Mechanism (SSM), which in November 2014 took over oversight of the island’s four systemic banks – Bank of Cyprus, Hellenic Bank, Cooperative Cyprus Bank and RCB – will not be as patient.

“Unfortunately [the SSM] cannot wait and will not accept gradual reductions in NPLs,” she said.
“It wants measures here and now, immediately.”

In July, non-performing loans stood at €22.4bn or 45 per cent of total loans, according to the latest official figures. The amount of restructured loans was €12.7bn of which only €8.9bn was being regularly serviced. The amount of accumulated provisions of Cypriot lenders stood at €10.5bn.

Taking questions from MPs, Georghadji said unemployment, currently at 10.6 per cent from a peak 17.6 per cent in 2015, is expected to drop to single-digits in 2018.

The governor warned again of the vulnerabilities and shocks the Cypriot economy – which emerged in 2015 from a prolonged recession – and the island’s banking sector face. The economy expanded last year a revised 3 per cent and grew in the both the first and second quarter an annual 3.5 per cent or more.

The Central Bank of Cyprus’ earlier forecast for this year’s growth was 3.1 per cent.

She also warned that while debating about the banking sector in the current presidential election campaign is fair, it could potentially “undermine everything we have achieved so far”.

Georghadji dismissed claims that Legacy Laiki – the part of the now-defunct Laiki Bank that is being liquidated in favour of the lender’s creditors – lost money in the sale of its stake in Bank of Cyprus, which it had acquired in exchange for its one-time rival absorbing the failed lender’s operations.

“If the sale was being done today, each share would fetch €2.06. We would have seen substantial losses if we hadn’t made the sale at the time.”