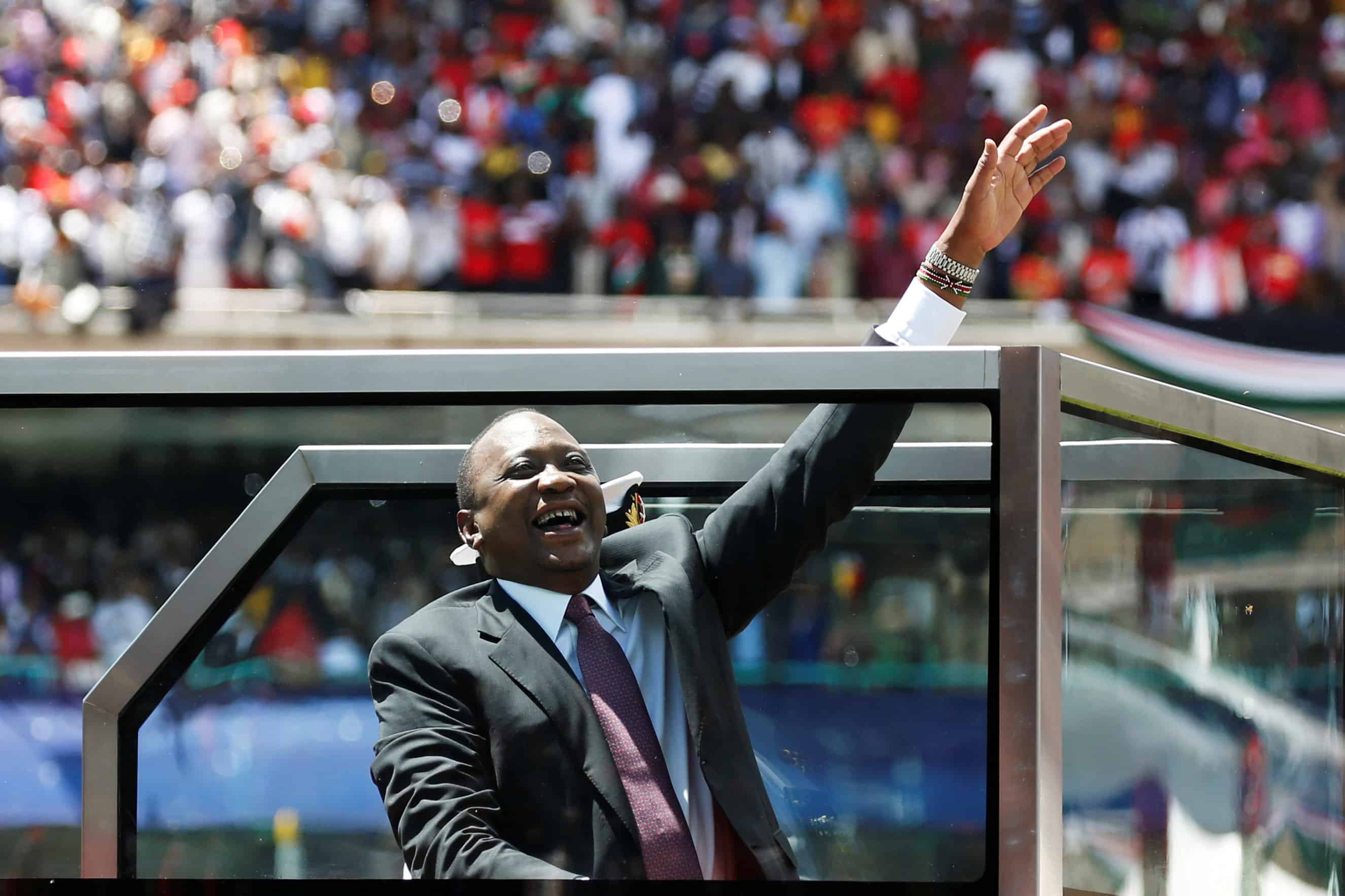 Kenyan President Uhuru Kenyatta was sworn in for a second term on Tuesday, shortly before riot police teargassed the convoy of opposition leader Raila Odinga, who promised supporters he would be sworn in himself on Dec 12.

Such a move would only deepen divisions opened by the extended election season in Kenya, a Western ally in a volatile region. Months of acrimonious campaigns and sporadic clashes have already blunted growth in East Africa’s richest economy.

At a lavish inauguration attended by the heads of many African nations, Kenyatta did his best to paint a picture of a country moving beyond that divide.

“The elections are now firmly behind us … I will devote my time and energy to build bridges,” he told a rapturous crowd as he was sworn in for a second, five-year term in a sports stadium in the capital of Nairobi.

But, he warned, Kenyans needed to “free ourselves from the baggage of past grievances, and … keep to the rule of law”.

Such words may ring hollow to citizens accustomed to the government ignoring detailed reports on corruption from the country’s auditor-general and documentation of hundreds of extrajudicial police killings every year from human rights groups.

Last year, Kenyatta angered many Kenyans by saying he wanted to tackle corruption but his “hands are tied”. His government has also promised to improve police accountability, but an independent watchdog has only ever managed convict two officers of murder despite thousands of brutality complaints.

Less than an hour after Kenyatta spoke, Kenyan national television carried pictures of riot police swinging clubs at civilians with their hands up.

“I didn’t hear him say a single word on corruption and how he’s going to fight it. I didn’t hear anything on justice,” said prominent anti-corruption campaigner Boniface Mwangi. “When he says that there’s the rule of law, his actions and the actions of his government show there’s no rule of law.”

Supporters of Kenyatta – who won the October poll 98 percent of the vote after Odinga’s boycott – want the opposition to engage in talks and move on.

“I’m sure Uhuru will be able to bring people together and unite them so we can all work for the country,” said Eunice Jerobon, a trader who travelled overnight from the Rift Valley town of Kapsabet for the inauguration.

But Odinga’s supporters see such talk of unity as tantamount to surrender. Many of them are drawn from poorer parts of the country, and feel angered because they say they are locked out of power and the patronage it brings.

Political arguments often have ethnic undercurrents, with Odinga’s supporters pointing out that three of the country’s four presidents have come from one ethnic group, the Kikuyu, although the country has 44 recognised groups.

Odinga accuses the ruling party of stealing the election, overseeing rampant corruption, directing abuse by the security forces and neglecting vast swathes of the country, including Odinga’s heartland in the west.

“This election of October 26 is fake. We do not recognise it,” Odinga told supporters from the rooftop of a car. “On Dec 12, we will have an assembly that will swear me in.”

Shortly after that, riot police teargassed his convoy and charged his supporters.

The opposition had planned to hold a prayer meeting in the capital on Tuesday, saying it wanted to commemorate the lives of Odinga supporters killed during confrontations with the security forces over the election period.

More than 70 people have been killed in political violence this election season, mostly by the police. Such killings are rarely investigated and police are almost never prosecuted.

But riot police sealed off the scene of the rally early in the morning, and fired teargas at residents, trying to prevent a crowd from gathering, as a helicopter hovered overhead. Several roads were blocked by burning tyres, rocks, glass and uprooted billboards.

While Kenyatta’s speech glossed over corruption and impunity of politicians and security officials, he promised to raise living standards by increasing jobs, home ownership, electricity connections and health insurance coverage.

Heads of state from Somalia, Rwanda, Uganda, South Sudan, Ethiopia, Djibouti, Zambia and other nations watched as Kenyatta gave a speech peppered with promises, including one to loosen restrictions on travel and owning property for other Africans.

All Africans can now get visas on arrival in Kenya, and members of the East African community can own property, work and live in Kenya, Kenyatta said, adding “to underscore Kenya’s commitment to pan Africanism, this shall not be done on the basis of reciprocity”.

More than 60,000 Kenyatta supporters, many clad in the red and yellow Jubilee party colours and carrying Kenyan flags, filled the stadium benches.

Thousands of others waited outside. Some, chafing at the restrictions, overwhelmed police and streamed in. Officers fired teargas to control them.