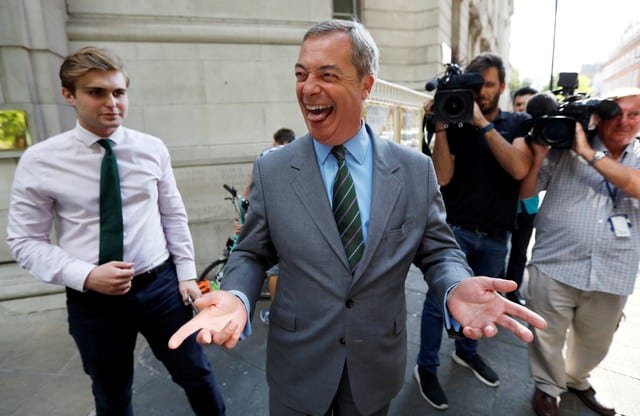 Brexit supporters accused Prime Minister Theresa May on Wednesday of being far too weak with the European Union after reports that she is ready to pay what Brussels is demanding to settle the divorce bill to leave the bloc.

The Daily Telegraph newspaper said the net bill would total £45 billion to £55 billion. While some UK officials have cast doubt on the numbers, the sides are moving closer to a deal on cash.

Brexit campaigner Nigel Farage told Reuters that Britain should walk away from the talks rather than offer such sums.

“This is a complete sell-out that is not in our national interest,” said Farage, a former leader of the UK Independence Party (Ukip) who played a big role in the 2016 referendum in which 52 per cent of Britons voted to leave the EU.

The two sides are hoping to make enough progress on three key areas – the rights of expatriate citizens living in the UK, the exit bill and the land border with Ireland – to move on to talks on a post-Brexit trade relationship.

Many businesses and investors fear a “disorderly Brexit” – one without a deal – could spook financial markets, sow legal chaos and harm the British and EU economies by disrupting trade ties and cross-border supply chains.

Farage and pro-Brexit entrepreneurs such as billionaire Peter Hargreaves say such fears are unfounded and that Britain can prosper outside a bloc they say is undemocratic and burdened with far too much regulation.

Some voters in Canvey Island, an area in eastern England where support for leaving the EU was nearly 73 pe rcent, expressed anger at the large exit bill under discussion.

“They are punishing us because we want to leave,” said Dave Sweet, a 65-year-old retiree who voted to leave. “Basically they are making it as difficult as possible.”

Keith Low, 69, said he suspected May – who voted to remain in the referendum – did not want to leave the EU and that the government was giving away voters’ money.

“It is not their money, its ours,” Low said. “We have decided to leave the club so why are we paying?”

Brexit-supporting lawmakers in May’s ruling Conservative Party expressed their unease during a debate in parliament.

Jacob Rees-Mogg, a prominent Conservative lawmaker, said Britain seemed to be “dancing to the tune” of the EU and sought assurances that no payments would be made unless there was a full agreement on trade.

Hargreaves, the second biggest donor to the Leave campaign, denounced the government’s handling of Brexit talks, saying they showed no understanding of the sums involved.

“We ought to say to the EU: ‘Thank you very much, we are never going to get a deal, goodbye’ and we are gone, lock stock and barrel, and carry on trading as before,” Hargreaves said.

Farage, who as Ukip leader helped convince May’s predecessor, David Cameron, to call theBrexit referendum, dismissed calls by some Remain supporters such as ex-prime minister Tony Blair that British voters might change their mind about leaving the EU.

“The revolution of 2016 is still rolling,” he said. “The European Union project is in deep trouble and it’s only a matter of time until it ends.”