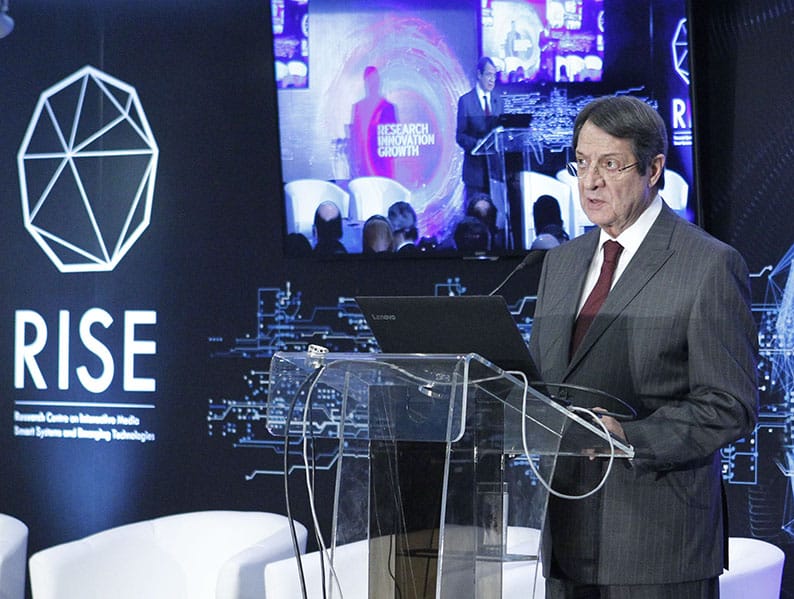 The launch of the new research centre on interactive media, smart systems and emerging technologies (Rise) took place on Wednesday morning in the old part of Nicosia, with participants underlining the potential for Cyprus to become a regional applied knowledge centre.

The centre is also expected to rejuvenate a neglected area of the capital old city, very close to the buffer zone.

Addressing the event, President Nicos Anastasiades referred to the goal of increasing investments for research to 1.5 per cent of GDP in the future.

He said he was pleased that Cyprus managed to secure funding for two research centres, the other one being the University of Cyprus’ KIOS research centre.

Rise, he said, has secured €15m in funding from the EU ‘Horizon 2020’ programme, while the government is to match that amount as per a 2015 cabinet decision within a 15-year schedule. The same applies for Kios, he said.

“This will provide both centres with the opportunity to attract investments and upgrade Cyprus’ prospects for innovative research and entrepreneurship,” Anastasiades said.

Mayor of Nicosia Constantinos Yiorkadjis said that Rise underlines the role of local governments in promoting knowledge. He added that the project aims to promote scientific research, attract start-ups and the business community and rejuvenate the area.

Robert-Jan Smits, the European Commission’s director general for research and innovation, said the commission was proud to invest in this project, selected among hundreds of proposals on the basis of two criteria, efficiency and excellence.

Rise’s scientific coordinator, associate professor Yiorgos Chrysanthou said the initial team will be formed by academics from the partner institutions, and the aim is to have 120 people in a few years, helping thus reducing youth unemployment and preventing brain drain.

Rectors of the University of Cyprus, Cyprus University of Technology, and representatives of the Open University Cyprus, University College London and Max Planck, also addressed the event.
The centre will be hosted in the building of the old municipal market, in the old part of Nicosia, close to the buffer zone. In the same area, a creative business quarter is also being created to support start-ups with the aim of upgrading the heart of old Nicosia.