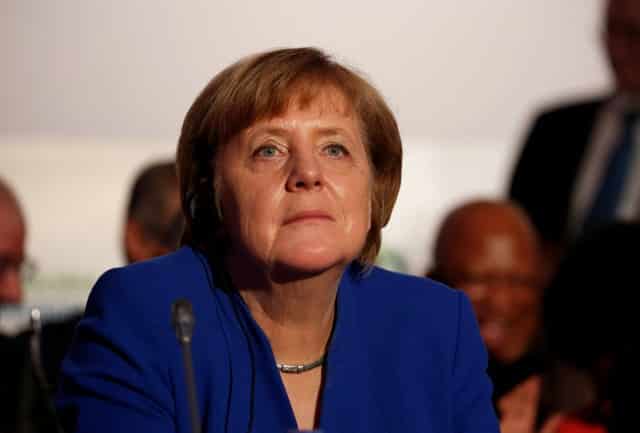 Merkel is struggling to find a coalition partner after her centre-right bloc bled support to the far right in a Sept 24 election and her attempts to form a three-way tie-up with the pro-business Free Democrats (FDP) and the Greens failed.

The SPD, which governed in coalition under Merkel since 2013 and suffered its worst election result in postwar history, had previously been strongly opposed to another “grand coalition”.

But under pressure from President Frank-Walter Steinmeier, SPD leader Martin Schulz has changed tack and signalled his willingness to discuss a way out of the political impasse in Europe’s biggest economy.

Steinmeier, a former SPD lawmaker and foreign minister, will host a joint meeting at 1900 GMT on Thursday between Merkel, her Bavarian conservative ally Horst Seehofer and Schulz as part of his efforts to facilitate the formation of a stable government.

The atmosphere ahead of the talks has been soured, however, by a fierce dispute between cabinet colleagues over a European Union licence for a weedkiller.

Conservative Agriculture Minister Christian Schmidt angered the SPD on Monday by breaking protocol to back an EU proposal to extend the use of glyphosate in the bloc for another five years, a measure opposed by the SPD. In reaction, SPD members have called for compensation and set various policy conditions.

“I recommend to all of us that we should not complicate the efforts to find a stable form of cooperation by publicly drawing red lines,” Health Minister Hermann Groehe, a senior member of Merkel’s Christian Democrats (CDU), told Rheinische Post daily.

Groehe said both parties could look back at four successful years, adding: “Even though a grand coalition should not be a permanent state, the big parties have a special responsibility for the country. We need a stable government.”

German Interior Minister Thomas de Maiziere, a conservative, told reporters a stable government was urgently needed to move ahead on security priorities such as hiring more police. Nothing could happen on that front until a budget was agreed.

Annegret Kramp-Karrenbauer, another senior CDU member, said both parties should overcome their differences and focus all their efforts on forming a solid coalition.

“The voters expect that this (weedkiller) row is put to an end,” Kramp-Karrenbauer told Deutschlandfunk radio. If talks with the SPD should fail, the last resort would be the formation of a Merkel-led minority government, she added.

Schulz has vowed to allow SPD party members to vote on any decision to reconstitute a coalition under Merkel. SPD members will discuss the options at a Dec 7-9 party congress.

The CDU’s business wing called on Merkel to “seriously consider” a minority government, warning that a re-run of a coalition with the SPD would only be possible for the price of “even more unaffordable promises” in social policy.

It said another “grand coalition” would further strengthen far-right and far-left parties and could eventually reduce support for the CDU/CSU bloc below the 30 per cent threshold.

The ALPHAMEGA Hypermarkets and MITSIDES flour bake sweet recipes for ‘One Dream, One Wish’