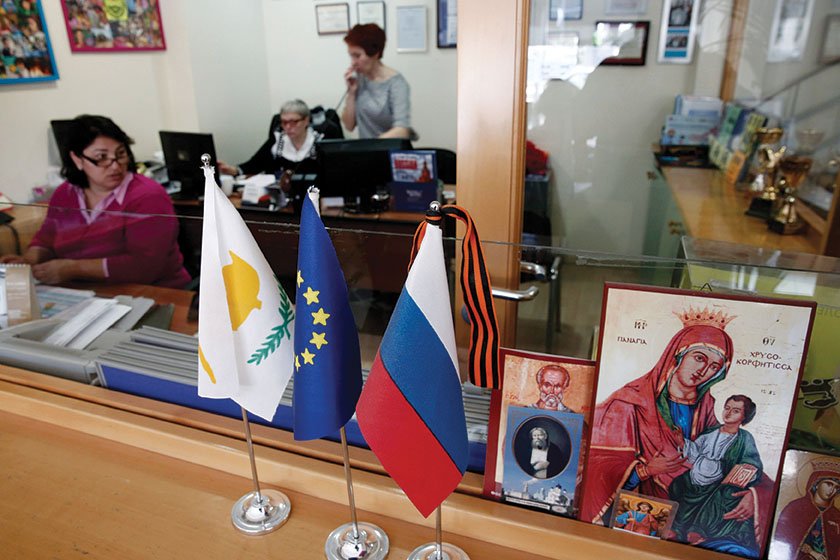 An office in Limassol displays the Russian and Cypriot flags

Russian companies are attracted to Cyprus mainly because of its tax regime, including double taxation treaties, European Union membership, and friendliness, a survey published by accounting firm EY has showed.

The survey, Russia Doing Business in Cyprus 2017 – Measuring Quality and Efficiency, said 83 per cent of interviewed Russian enterprises “commended Cyprus for the friendly tax regime and stability of its tax laws, the wide range of double taxation agreements with other countries, its membership to the European Union, and the exceptional professional and legal services offered in the country”.

The accounting firm added 53 per cent of respondents said they appreciated that Cyprus offers a large supply of companies that provide professional services in Russian, while 65 per cent said they could find Russian speakers to employ.

The report said more than 69 per cent of the Russian-owned companies are based in Limassol, 29 per cent in Nicosia, and 1 per cent in Larnaca. More than six in 10 Russian companies launched its operations in Cyprus 10 years ago or less.

The EY survey showed that 19 per cent of Russian companies in Cyprus operate in the area of investment, exchange and brokerage, 9 per cent in real estate and construction, an equal number in accounting, 8 per cent in mining and metals, 8 per cent in oil and gas, and another 8 per cent in software development.

The share of those operating in the area of media, shipping, retail and wholesale, and legal and business consultancy, was in each case 5 per cent, EY said.

More than four out of 10 companies said bureaucracy was a disadvantage and almost one-third complained about the banking system, EY said. The size of the market posed a problem for more than one in four Russian companies in Cyprus while more than one in five said air connectivity and the lack of skilled labour was a problem.

Most complaints related to the department of immigration, the land registry and the town-planning department. The highest degree of satisfaction concerned the company registrar and thetax department.

EY carried out the survey on behalf of the Cyprus-Russian Business Association.

“Through working together, we can overcome these challenges to further increase and improve economic and trade relations. We would like to thank all the respondents for taking the time to give us valuable insights.”

Antis Nathanael, a member of the board, said that as Russian businesses become an increasingly large part of the island’s economy, the findings of the survey will help focus on key priorities and potential problems Russian enterprises are facing.

A duo that sticks together, plays together