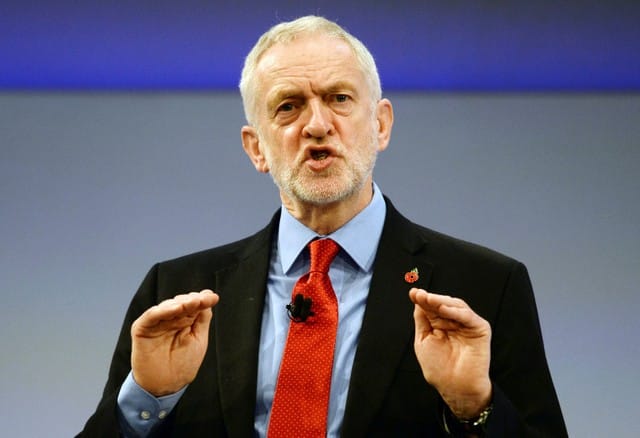 Britain’s opposition Labour leader Jeremy Corbyn warned Morgan Stanley that bankers are right to regard him as a threat because he wants to transform what he cast as a rigged economy that profited speculators at the expense of ordinary people.

Morgan Stanley last month warned that political uncertainty in Britain was a bigger threat than Brexit for some domestic investors given the risk of Corbyn winning power and radically changing Britain’s free-market economy.

“Bankers like Morgan Stanley should not run our country but they think they do,” Corbyn, a 68-year-old socialist, said in a video posted on Twitter.

“So when they say we’re a threat, they’re right: We’re a threat to a damaging and failed system that is rigged for the few,” he said.

London, which vies with New York for the title of the world’s financial capital, dominates the $5.1-trillion-a-day global foreign exchange market and is home to more banks than any other financial centre.

But many bankers, CEOs and investors were spooked by the shock 2016 vote for Brexit and have been dismayed by the political crises which followed, including Prime Minister Theresa May’s botched gamble on a June snap election.

May lost her party its majority in parliament in that election while Corbyn’s unexpectedly strong result in the vote has convinced many of Labour’s opponents that Corbyn is a potential prime minister if May’s government falls.

Kept in power with the support of a small Northern Irish political party, May has just over a year to negotiate Britain’s divorce from the EU that will shape Britain’s prosperity and global influence for generations to come.

“From a UK investor perspective, we believe that the domestic political situation is at least as significant as Brexit,” Morgan Stanley analysts said in a Nov 26 note to clients.

In the note, Morgan Stanley said there was a high likelihood of another national election in late 2018 – just months before Britain is due to leave the EU in March 2019.

The bank’s analysts said a Labour victory could mark the biggest shift in British politics since the late 1970s when Margaret Thatcher won victory and started to privatise chunks of the economy.

“It is certainly plausible that the Labour Party could ultimately moderate some of its more radical policy ideas; the alternative could be the most significant political shift in the UK since the end of the 1970s,” Morgan Stanley said in the note.

Corbyn has cast bankers as the villains behind the 2008 financial crisis and promised to increase taxes on the banks and investment funds which trade out of London, the only financial capital to rival New York.

“These are the same speculators and gamblers who crashed our economy in 2008 and then we had to bail them out,” Corbyn said. “Their greed plunged the world into crisis and we are still paying the price.”

Corbyn’s manifesto promising renationalisation, higher public spending and tax rises for the rich won him 40 percent of the votes cast while May’s Conservatives won 42 per cent.

Tesla switches on giant battery to shore up Australia’s grid

Ten years of running for charity