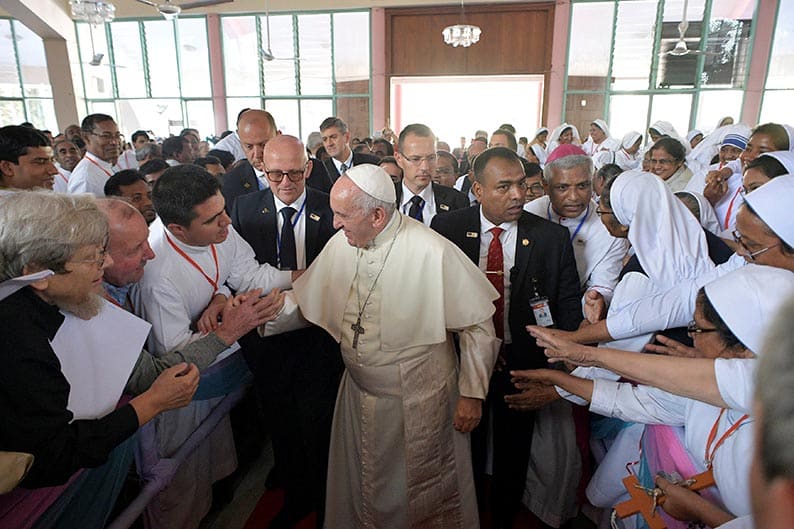 Pope Francis is welcomed by faithful during a meeting with Bangladeshi priests and nuns in Dhaka, Bangladesh

Pope Francis ended a diplomatically tricky trip to Asia on Saturday, seeking the forgiveness of Rohingya Muslim refugees in Bangladesh after his controversial decision to not directly refer to their plight when he visited their homeland, Myanmar.

On the last day of his three-day visit to Bangladesh, which came after meetings in Buddhist-majority Myanmar, the pope went to a home in Dhaka founded by Mother Teresa for orphans, unwed mothers and destitute elderly.

Later in a speech to an audience of around 7,000 young Catholics, Muslims and followers of other religions, the pope spoke about welcoming and accepting those who “act and think differently than ourselves”.

“When a people, a religion or a society turns into a ‘little world’, they lose the best that they have and plunge into a self-righteous mentality of ‘I am good and you are bad’,” Francis said at the Notre Dame College, founded by Catholic priests.

He also asked his young listeners to “not spend the whole day playing with your phone and ignoring the world around you!”

Francis said he was very pleased by an inter-religious meeting on Friday night, where he had an emotional meeting with refugees from Myanmar and then used the word Rohingya for the first time on his current trip, saying they had God within them and should be respected. He also sought their forgiveness in the name of all who persecuted them.

Previously, in Myanmar, he followed the advice of Myanmar Church officials who said his use of the word could prompt a backlash against Christians and hurt that country’s fragile path to democracy.

That had disappointed rights groups such as Amnesty International, which has said Myanmar’s “security forces were carrying out a systematic, organized and ruthless campaign of violence against the Rohingya population.”

Myanmar’s military has denied the allegations.

The country does not recognise the stateless Rohingya as an ethnic group with its own identity and considers them as illegal immigrants from Bangladesh.

Mother Teresa, who started the Missionaries of Charity to serve “the poorest of the poor,” opened the Dhaka home in the early 1970s to look after Bengali women who became pregnant as a result of rape by Pakistani soldiers during the war of independence.

The pope made an impromptu address to nuns and priests at the home during which he praised Bangladesh, a Muslim-majority country where Catholics make up less than one percent of its around 169 million people, for having what he called some of the best inter-religious relations in the world.

His words of appreciation have been welcomed by Bangladesh, which was already home to around 400,000 Rohingya Muslims before nearly 625,000 more came since August after the Myanmar army launched an offensive in response to attacks on security posts by Rohingya militants.

Bangladesh last week signed an agreement to return the refugees over time, “while at the same time expanding refugee camps and constructing tens of thousands of shelters for them in Bangladesh until they are able to return”, a statement issued on behalf of the government said.

“Dear friends in Myanmar and Bangladesh, thank you for your welcome!” Francis said on Twitter as his flight took off. “Upon you I invoke divine blessings of harmony and peace.”

France’s Macron calls on Iraq to dismantle all militias