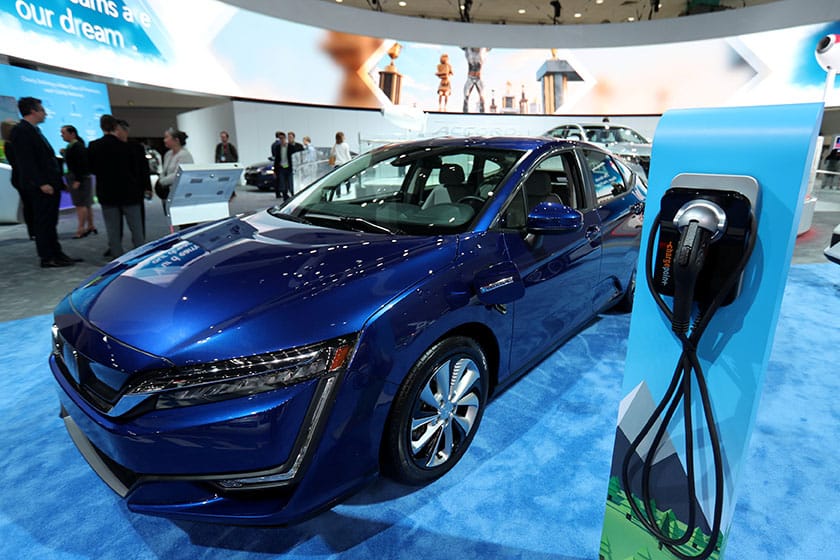 The end of the combustion engine is nigh. Electric Vehicles (EVs), projected to reach 100 million cars in circulation worldwide by 2030, are the new fad. Just about every small or major manufacturer is racing to produce EVs with so-called “zero emissions”. Even Dyson, best known for its vacuum cleaners, is on the act. On top of all this frenzy, Amazon has patented technology which will involve drones in re-charging stranded EVs. Unlike petrol and diesel cars that add to the greenhouse gases and release poisonous compounds linked to acid rain, heart disease, cancer and strokes, EVs are presented as clean. A particular manufacturer is waxing lyrical about it: “Start the car and you begin in EV mode. At this point, your [car] is using no fuel and producing zero emissions…”

“Using no fuel” and “zero emissions” is misleading. Electricity for EVs has to come from somewhere: power plants. Power plants the world over are still the single-largest source of environmental pollution. In the US they produce over two billion tons of pollutants per year.

This is even worse in China and India. For instance in China 70 per cent of all electricity produced is based on burning fossil fuel. In contrast, Norway and, to a lesser extent Canada, rely on hydroelectric power to produce relatively cleaner electricity. There are, therefore, huge regional and global variations in the way electricity is produced and how clean that energy is. It follows that the blanket application of the appropriateness and desirability of EVs (one size fits all policy) is misguided. Expanding the use of EVs everywhere without considering this diversity in energy production may generate, in aggregate terms, more harmful emissions than has been anticipated. Furthermore, the increase in demand for electricity to power EVs will require a parallel expansion in supply.

Harnessing sustainable sources of energy, such as solar and wind power, to expand production is limited. The availability of natural gas-fired power plants is increasing but again limited. More nuclear power plants may be an option. But this is hardly the answer given social, environmental and health concerns surrounding the industry. Inevitably, demand can only be met by a combination of sources of energy including fossil fuels. In such circumstances, EVs may help to sustain, indeed increase, not decrease emissions. Also, the regional and global divide between “clean” versus “dirty” power plants may become more pronounced. It may create new geo-political frictions in an already volatile world: between states which are environmentally conscious and which use clean energy but starved of adequate supplies; and states which are not and which use polluting sources of energy but left with ample supplies of electricity to pursue economic expansion and political influence.

Most EVs are fully charged overnight. Due to this, owners of EVs are found to use, on average, four times more electricity at night than other consumers. It is both convenient and cheaper. Overall, aggregate electricity consumption falls at night-time. Utilities reduce prices to encourage more consumption to keep revenue constant and avoid sudden power surges in the day. But as the demand for electricity at night-time increases by the use of EVs, and let us not forget in day-time too, so do emissions from power plants. Equally, EVs perform better in warm climates. They produce more power, have a longer range and use less electricity. In colder weather their performance falls dramatically. Their batteries, like all batteries, discharge faster and require more frequent re-charges resulting in more emissions.

EVs bear other environmental, safety and health risks. Several incidents of EVs catching fire due to overheating or minor damage to their lithium-ion battery packs have been reported. Consequently, EV battery packs are heavily protected from exposure. This adds to the weight of EVs. Weight is bad for electricity consumption and bad for emissions: more power is needed to shift the weight. Additionally, lithium-ion batteries create self-induced heat known as “thermal runaway”. This can ignite components which may trigger chemical reactions which in turn can cause a fire.

All batteries are toxic. Exposure to lithium-ion has its own acute health costs: lung damage, pulmonary and liver edema, loss of muscle function, internal bleeding, cardiac failure or eye damage. Their fragility and toxicity raise questions about their safe disposal and re-cycling. When these risks are considered in tandem with the emissions from the production of lithium-ion batteries, the claim that EVs are “clean” is suspect. Production of a standard lithium-ion EV battery of 25 to 30 kilowatt-hours can create up to six tons of carbon dioxide. Furthermore, these batteries operate extremely high electrical circuits which can injure or prove fatal. Conventional vehicles have 12 or 24 volt circuits. EVs can generate up to 800 volts direct current (DC). As EVs store vast amounts of electricity, questions about health safety arise for driver and passengers from prolonged exposure to electromagnetic fields.

In Cyprus, fuel tax yields about €300 million in annual revenue (about eight per cent of all taxation). In the UK fuel duty on petrol and diesel provides the Treasury with over £28 billion a year. Under these circumstances, hardly any government will relinquish such revenue in the name of EVs and the environment. In the event of an all-out demise of the combustion engine, governments will simply design new taxes on EVs to make up for the loss. Most likely governments will exploit the increasing use of EVs alongside the use of conventional cars as another convenient opportunity to increase tax revenue.

This has happened before. Originally, diesel was introduced as a credible “cleaner” alternative to petrol. As at present with EVs, massive subsidies, tax breaks for purchasers and lower prices at filling stations were instigated. Motorists were seduced to switching to the new beneficial “juice”. Until, of course, there were enough diesel cars on the road and the “discovery” that diesel is far more polluting than petrol. This led to a U-turn in policy. Governments imposed new taxes on consumers and started penalising diesel users with stiff hikes in prices and simultaneously with extra duties on their cars’ high emissions.

For EVs to have a discernible positive effect on the environment the source of their power must be clean energy – which is not. The source – electricity grids and individual power plants – remains the crucial part that determines emissions. Credible concerns about power plants and regional variations; batteries and their production; their weight, accessibility, re-cycling and safe replacement; their range and capacity to store power; their safety regarding electromagnetic fields and fire risks; and most importantly the establishment of new industries for their safe disposal have to be addressed. Without such broader structural considerations EVs will not reduce emissions. Rather, they will certainly add to the disastrous “man-made” stresses inflicted on the environment which are depleting, altering, poisoning and gradually pulling our planet apart.

The banks, not the state, should compensate victims of 2013