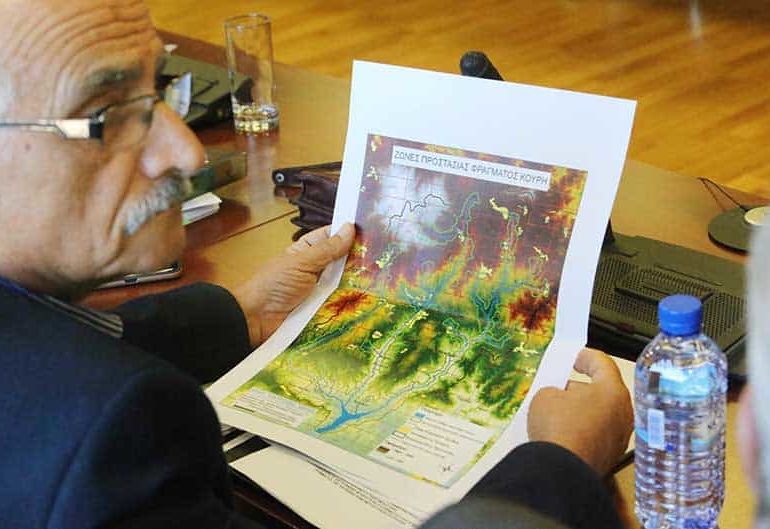 While two reports are pending over the controversial Pera Pedi development project, it is unlikely either of them will provide answers to many of the questions that have arisen since allegations of its links with President Nicos Anastasiades repeatedly hit the headlines this past month.

One report will be an environmental study on the planned development and another will be undertaken by Auditor General Odysseas Michaelides who will be limited in the scope of which facets he can actually examine.

Michaelides was ordered by Anastasiades himself to carry out an investigation after the president’s name appeared on the front page of Akel-linked Haravghi newspaper that reported part of the land earmarked for the project belonged to Anastasiades.

If approved, the development undertaken by Parnitha Development Ltd will be built on almost 200,000 square metres of land in Pera Pedi, a mountain village near Platres and the president’s birthplace. Construction will cover more than 24,000 square metres and include a hotel, a spa, five villas, a church and a stable to host up to eight horses.

The report said that a parcel of land in Pera Pedi, number 57, measuring 83,279 square metres, which Anastasiades had reported 1/12th ownership of in his May capital statement, appears to be part of the development, raising questions about the president’s involvement in the project.

He denied the report on October 29 when it was published, saying it was done as an attempt to smear his name as presidential elections neared.

The following day, he issued another statement angrily dismissing any connection with the planned project.

“Those who believe they can hurt me by claiming that the development will be built in my plot will be disappointed,” he said.

“I owned 1/12th and the rest of the shares were bought by the developers. I will make the details public, but not before those who make these claims have ridiculed themselves before the people of Cyprus. Those who bought the land left me with a ditch on which one can’t even build a hut…therefore, in my space there could not be any development,” he said.

“As has already been stated by the president, after the sale of his brother’s and sister’s shares, none of his family members have any relation or interest in the development in question.”

This alone began to raise questions as to how the company was confident enough to purchase the land from Anastasiades’ relatives without having any approval for the project.

MP and Haravghi editor Eleni Mavrou told the Sunday Mail that while it wasn’t entirely unnatural that someone may buy a plot of land and then get all the necessary approvals, this is more often the case when purchasing a house.

“It is strange to buy a big expanse of land which includes forest areas that you can’t build on, in a community within a zone that can’t have this level of development in the hope that the application will get approved,” she said.

“Additionally he was co-owner of the land so when his relatives wanted to sell it, he had to sign. He can’t feign ignorance saying he doesn’t know anything about it.”

Within a week, Anastasiades had ordered Michaelides to investigate the matter and then decided to donate the piece of land to the state.

This did little to quell critics however who felt it was his way of trying to put the lid over a much bigger story.

The Greens’ leader Giorgos Perdikis pointed out Anastasiades’ erratic response and suggested the move to donate could point to an admission of impropriety.

“When the issue first came up, he initially angrily responded that he has nothing to do with it, that it was campaign-trail mud-slinging, and that the complex was going to be built in an area that was nowhere near his plot,” he said.

“He then angrily admitted to co-owning the plot that was sold to the investors, and angrily argued that if he had anything to do with the project it would have been licensed promptly. Then he announced he would be donating the land he owns, and the famous ditch, to the state. One of two things is happening: either Mr Anastasiades acknowledges that owning a piece of land adjacent to an environmentally destructive project, the value of which will appreciate as a result, is inappropriate, or he is simply hunting for votes without shame.”

Haravghi then ran another piece saying Anastasiades was the owner of yet another parcel of land in Pera Pedi, number 56.

It alleged that on page 143 of the environmental study carried out by Parnitha, the parcel of land number 56 belonged to the company and was part of the development project. One page later however, a table outlining all the plots does not include number 56.

Additionally, a Parnitha representative had told the House environment committee they owned 24 parcels of land while the study says there are 20, according to the report.

It later emerged that Anastasiades had swapped land in parcel number 56 as it was in a protected area that does not allow for any development, for land in number 57.

This was never denied by the presidency and a statement by the land registry outlined the 83,279 square metres he had under his name were 1/12th from his inheritance from his mother and 836/83279th was the swap.

Though Anastasiades had reportedly said in an interview with Cybc that this was a routine procedure and nothing suspicious, Mavrou questioned “why the president didn’t deem it necessary to speak openly about the plots of land from the onset.”

Haravghi said the land the president acquired with the swap may have a higher value than what he originally owned due to the zone it was in. The land registry’s statement specifies the swap is of the corresponding value of the original and the procedure was completed in September 2016.

According to chairman of the House environment committee Adamos Adamou of Akel, there are two main issues at stake – the environmental effects of the project and of course the ethical.

As it stands, the application filed by Parnitha will see the felling of 2,114 trees, which the company said it would replace. Both the forestry and water departments have voiced serious concerns.

“The first time a representative from the forestry department was at the committee, he said it was absolutely set in stone that such a thing would not be accepted. The second time around, his superior attended and said they would wait and see,” Adamou told the Sunday Mail.

Lenas Markantonis, the community leader of Pera Pedi, voiced his community’s support of the project, arguing that felling a couple of thousand trees was a small sacrifice for a project that would breathe life to the broader area.

The political angle, according to Adamou, is the ethical aspect of the story.

“You’re the president of the Republic. You don’t do things that cast shadows.”

There is nothing wrong with the president owning land, even if it is part of a major development, Adamou specified. Anastasiades however could have been clearer from the onset.

Mavrou echoed the deputy saying “he has property – if he wants to sell it, it’s his right. What casts doubts however is that he didn’t disclose it all and said he has nothing to do with it when it was proven that he did.

“He then attempted to make excuses for himself donating the land to the state so he could steer the attention elsewhere.”

Both deputies specified that the audit report Michaelides will undertake cannot examine the ethical stance of the president but the procedure and evidence of environmental effects.

“There isn’t any evidence for the political scope the story has taken for the auditor to examine,” Adamou said.

Michaelides was not immediately available to specify when his report would be ready.

Ireland says unclear if EU, UK can agree wording on border by Monday

Erdogan says will not succumb to U.S. ‘blackmail’ over court case