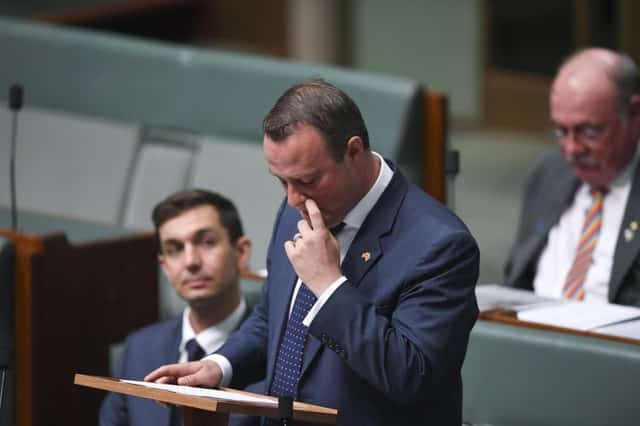 An Australian conservative politician on Monday proposed to his long-term partner on the floor of parliament, ahead of the expected passage of a measure for same sex couples to marry.

Australians overwhelmingly voted for same-sex marriage in a postal vote in September and a marriage equality bill that passed the senate last week is being debated in the lower house, where it is expected to pass this week.

Liberal member of parliament Tim Wilson proposed to his partner Ryan Bolger in the capital of Canberra, the two having already exchanged rings but having pledged to wait for the country to pass the legislation before they wed.

“This debate has been the soundtrack to our relationship,” an emotional Wilson said to his partner, seated in parliament’s public viewing area above.

“In our first speech I defined our bond by the ring that sits on both of our left hands, that they are the answer to the question we cannot ask. So there’s only one thing left to do – Ryan Patrick Bolger, will you marry me?” asked Wilson, who was formerly Australia’s human rights commissioner.

Both Prime Minister Malcolm Turnbull’s Liberal-National coalition government and the main opposition Labor Party have said they aim to pass the law by Dec 7, but any proposed amendments could stretch out that timeline.

Passage of the bill will make Australia the 26th nation to legalise same-sex marriage, a watershed for a country in which some states considered homosexual activity illegal until 1997.

“This is an issue of fundamental fairness,” Turnbull said to parliament later on Monday. “A society that promotes freedom and equality under the law should accord gay men and women the right to marriage.”

About 80 percent of eligible voters participated in the voluntary survey, a turnout larger than for Britain’s Brexit vote and Ireland’s same-sex marriage referendum.

“The message today, to every gay person in this nation, is clear,” Turnbull added. “We love you, we respect you, your relationship is recognised by the Commonwealth as legitimate and honourable as anybody else’s.”