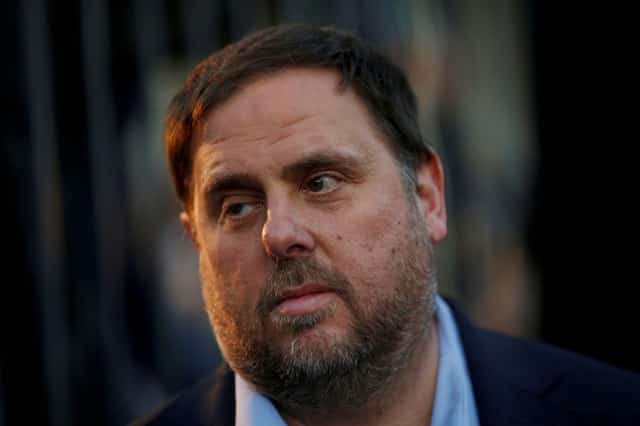 File photo: Then Catalan Vice President Junqueras looks on before delivering his speech outside the University of Barcelona in Barcelona

The ruling will leave the leaders of Catalonia’s biggest secessionist groups behind bars during campaigning for the Dec. 21 election, and could generate sympathy for the independence movement just as opinion polls show some voters abandoning it.

The battle between Madrid and secessionists in the wealthy northeast region has hurt the national economy and prompted thousands of companies to shift their legal headquarters outside Catalonia, which accounts for a fifth of the Spanish economy.

The former head of the regional government, Carles Puigdemont, and four of his disbanded cabinet, went in to self-imposed exile in Belgium shortly after a call for secession Oct. 27. They are currently under conditional release after an international arrest warrant was served against them.

The judge in Brussels on Monday said he would rule on Puigdemont’s extradition Dec. 14.

Eight members of the disbanded cabinet, including vice-president Oriol Junqueras, were detained in custody Nov. 2 facing potential charges of sedition, rebellion and misappropriation of funds.

In a court statement, the judge ruled that, while he considered there was no risk the defendants would leave the country, he did believe there was a risk of criminal reiteration.

The Catalan politicians have since called to be released to campaign for the election, with Junqueras heading his ERC party’s list. Campaigning officially begins on Tuesday.

While many polls have shown that the election is likely to be a dead heat between the pro-independence and pro-unionist camps, the latest official poll saw the secessionists just losing their majority in the regional parliament.

Pro-independence party Junts per Catalunya was seen as winning 25-26 seats, ERC another 32 seats and extreme-left party CUP 9 seats, according to the poll carried out by Sociological Research Centre (CIS) published on Monday.

That would give the secessionist camp just 67 seats in the 135-seat regional parliament, stripping them of the previous slim majority.

Spanish Prime Minister Mariano Rajoy has flatly refused to negotiate any talks on an independence referendum, saying that the constitution does not allow for any separation of any of the country’s 17 autonomous regions.

The regional election was called to return legal certainty to Catalonia, Rajoy has said.

In an editorial in Politico, published on Sunday, Junqueras said Madrid could not be trusted to oversee the election, and called for the European Union to step in.

“It is hard to believe that Spain’s conservative People’s Party government will actually respect the result of these elections. Therefore, it is vital that the European Union oversee the results to ensure they are truly respected, and to erase any doubts about the outcome,” he wrote.

EU leaders are extremely wary of Catalonia’s search for independence because it has stirred separatist feelings far beyond Spanish borders and European Commission President Jean-Claude Juncker had called nationalism a “poison”.