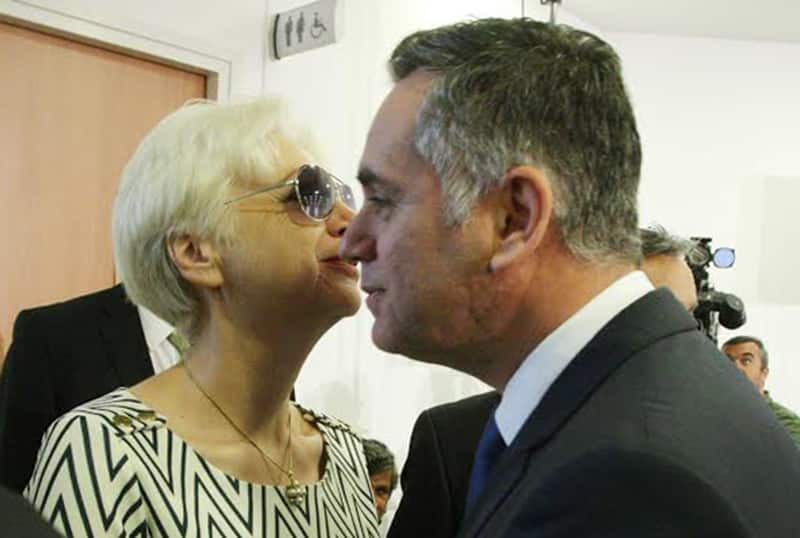 Solidarity leader Eleni Theocharous with Diko leader Nicolas Papadopoulos, whose party she will stand with for the European elections

The 300 members of Solidarity that have quit the party over leader Eleni Theocharous’ decision to back Nicolas Papadopoulos in the upcoming presidential election are real people and not ghosts, a statement from their Dissenting Committee said on Monday.

The committee, an ad-hoc instrument created to defend the party members who disagree with Theocharous and decided to back President Nicos Anastasiades’ re-election bid, said its members are former Evroko members.

Evroko, a fringe party created when leader Demetris Syllouris clashed with then-Disy leader Anastasiades over the party’s stance in the 2004 referendum on the Annan plan and left, was absorbed by Solidarity when Theocharous also left Disy.

Following the initial wave of departures, Theocharous had claimed that very few actual members had left, with most who signed the initial statement being either not party members or non-existent people.

“Our members are not very few but actually the entire party, as Mrs Theocharous only had 60 members [when she founded Solidarity], which were added to Evroko’s registry,” committee chair Yiorgos Zachariades said.

“Of course, Mrs Theocharous received the response she deserved, since at Solidarity’s convention [on Sunday], in which the party’s youth arm, the women’s organisation, the party’s farming association and the official party participated, she was unable to attract more than 120 people.”

Commenting on Theocharous’ convention speech, in which she referred to “self-serving people who move from one party to the next”, Zachariades said she would know.

“We can assume Mrs Theocharous knows this full well, considering she moved from Diko to Edek to Disy and then to Solidarity,” he said.

“And now she is about to return to Diko.”

The committee, Zachariades said, has decided to support Anastasiades’ re-election, arguing that there is no room and time for experimentation and turning to the past, “but only the tested personality of Nicos Anastasiades”.

“A new mandate for Nicos Anastasiades, who managed to bring Turkey, the true instigator of our problem, to the negotiating table and before her responsibilities, the man who brought investments and created new jobs, the President who started reforms and fought to make our state a real modern state, a real one without guarantees and protectors, as befitting a member state of the European family,” Zachariades said.