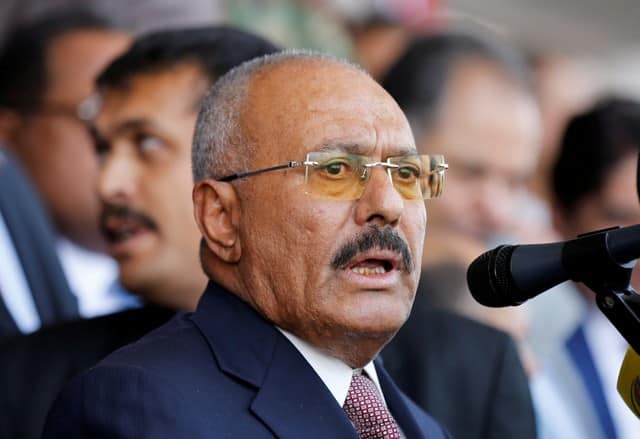 Veteran former president Ali Abdullah Saleh was killed in a shooting on Monday after switching sides in Yemen’s civil war, abandoning his Iran-aligned Houthi allies in favour of a Saudi-led coalition, foes and supporters said.

Sources in the Houthi militia said its fighters stopped Saleh’s armoured vehicle with an RPG rocket outside the embattled capital Sanaa and then shot him dead. Sources in Saleh’s party confirmed he died in an attack on his convoy.

Unverified footage of his bloodied body lolling in a blanket circulated just days after he tore up his alliance with the Houthis following nearly three years in which they had jointly battled the Saudi-led coalition that intervened to try to reinstate Yemen’s internationally recognised government.

In a televised speech on Monday, Houthi leader Abdul Malik al-Houthi congratulated the Yemeni people for what he described as a victory against a “conspiracy of treason” engineered by the group’s Gulf Arab enemies. He did not mention Saleh’s death.

Saleh, 75, had said in a speech on Saturday that he was ready for a “new page” in ties with the coalition and called the Houthis a “coup militia”, leading them to accuse him of betrayal.

Warfare between the former allies has torn densely populated Sanaa for days as Houthi fighters seized control of much of the capital and on Monday blew up Saleh’s house while coalition jets bombed their own positions.

The end of their alliance had seemed poised to transform the fortunes of war after two years of attrition along mostly static front lines, which gave the Saudi-led coalition a new advantage over the Houthis.

Stalemate in Yemen has contributed to a human catastrophe as a Saudi-led blockade and internal fighting has thrust millions to the brink of famine and accelerated the spread of deadly epidemics.

Eyes will now turn to Saleh’s political allies and military commanders, whom analysts credited with aiding the Houthi march southwards in 2014 to dominate swathes of western Yemen.

“What happens now and whether his family and political allies fight on is not yet clear,” said Adam Baron, a Yemen expert at the European Council on Foreign Relations.

“His people will be angry, and many will certainly be out for blood, but there are many in the middle especially among the tribes who will fall with whoever appears stronger,” he said.

“The (Saudi-led) coalition may have put a lot of their eggs in Saleh’s basket only for it to fall over now. They appeared to strongly support his attempt to confront the Houthis and now that bid may have failed.”

Saleh once compared his 33-year rule over Yemen to “dancing on the heads of snakes”, a period that included unification of conservative north and Marxist south Yemen, civil war, uprisings, Islamist militant campaigns and tribal feuds.

But he was forced from power in 2012 following an Arab Spring uprising that left him wounded by an attempted assassination, leading to a Saudi-brokered political transition.

He fled to his one-time ally Saudi Arabia for treatment of his injuries and the princes in Riyadh allowed him to return to Yemen months later – something they came to bitterly regret as he undermined the transition plan and later joined the Houthis.

That set the stage for his final role – that of ally to the Houthi movement which he had previously fought six times during his own presidency, and to Iran, the Houthis’ political backer.

But they vied for supremacy over the territory they ran together, including Sanaa, which the Houthis seized in September 2014, and their feud burst into open combat on Nov. 29.

The manoeuvring ended on Monday, as footage circulating on social media appeared to show his corpse, a deep wound in the side of its head, wrapped in a red blanket and being loaded onto a pick-up truck as tribal fighters waved their weapons.

“Praise God!” and “Hey Ali Affash!” (another name for Saleh) they were shouting.

Officials in his own General People’s Congress party said Saleh was killed outside Sanaa in an RPG and gun attack on his convoy along with the GPC’s assistant secretary general, Yasser al-Awadi.

His death was confirmed by Saleh’s nephew and former chief of Yemen’s security forces, Yahya Mohammed Abdullah Saleh, who hailed him as a martyr on his official Facebook page.

Residents reported that the situation in Sanaa had calmed. Most people were indoors, and streets were deserted amid a state of fear as the Houthis asserted full control. Saudi-led aircraft continued to fly overhead.

“With the aid and approval of God, the security forces backed up by wide popular support were able last night to cleanse the areas in which the militias of treason and betrayal were deployed,” he said in a statement.

Residents said the warring sides traded heavy automatic and artillery fire as the Houthis advanced in the central Political District, which is a redoubt of Saleh and his family.

“We lived through days of terror. Houthi tanks have been firing and the shells were falling on our neighbourhood,” said Mohammed al-Madhaji, who lives in the frontline district.

“The fighting has been so violent we feel we could die at any moment. We can’t get out of our homes.”

Houthi media and political sources also reported that the Houthis also advanced toward Saleh’s birthplace in a village outside Sanaa where he maintained a fortified palace.

England finally fire but Australia in charge in Adelaide