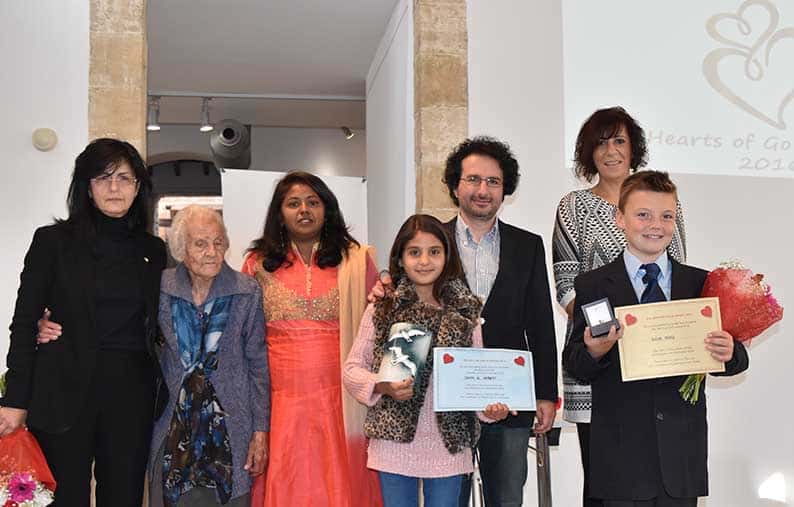 Nominees from all over the island, for the tenth annual Hearts of Gold awards have been announced.

Tens of nominations of deserving children and adults were made by members of the public, and a panel of 14 judges, all philanthropists, are now voting in each of the four categories, awarding a winner and an honorary mention.

“This year is particularly difficult as there are so many deserving people and children that have been put forward. We want them to know that they are all winners and please keep up the good work and great attitudes,” said one of the judges.

Taylor Hargett, 16, Hala Ayman Karoum, 11, Demitri, 8, Eleni,10, Nico, 13, Aili Bielicki, 8, and Massa Ayman Karoum,10, have also been nominated.
All of these youngsters have either shown dedication, determination or courage, are coping with illness, raising money for charity or are excellent role models to others.

In the adult section, nominees include: 94 year old Raymond Woolley and Petros Stylianou for their inspirational attitude and achievements, Alina Loisou, Geoff Eccleston, Sarah Coyne and Peter and Debbie Morton for their charitable endeavours, Andrea Siddons for rescuing and rehoming animals, Ruth Walton, Karen Skinner, Linda Locke, Paula Vick and Tracie Carter for a fund raising bra chain, David and Cathy Lewis for their care and nurture of a teenage girl, and Dawn Foote for dedication to Tala cat park.

Also nominated are: Keith and Wendy Watkins for cleaning up the Akamas,  Kyriacos Loucas for his determination and talent, Louise Bedenham for her philanthropy, Nikola Nikolov and Blaga Petkova for their devotion to bringing up a relatives three children and Panicos Chrysanthou for his caring attitude.

Olga Logutenkova for teaching skills, bikers Paul Carter and Phil Scates for helping a terminally ill patient fulfil a dream, Billy Hardy for his brave attitude and Suzi Von Buren and her charity Zypenhunde. Zac Theophanou for his fight for equal rights, Irina Yakimovich for fundraising, Patricia Phaedonos and Sylvie Mantis for their humanitarianism, Kathie Houliotis for her kindness and Peter Scarborough for his determination.

Rehab al Habrat, Father Carlos Ferrero and Wendy Burdon for their work with refugees, lifeguard, Vasos Christodoulou- for his dedication, the friends hospice shop volunteers and hospice staff for their services, Costas Gavrieledes for establishing LGBT rights, Nilgun Akin for her creation of bi-communal activities, and Giorgoula Gavrielidou for promoting Paphos to become wheelchair friendly.

Also nominated is Mikka Heaney the Gift of Love, Andri Avraam for volunteering, Nektarios Toursidis for teaching hundreds of children to dance, Ivy Gibson for her charity blankets, Matthew Harris for his work at PAWS shelter along with the volunteers, Stephanie Driscoll for Paws charity shop, Angela Allery for her work with unwanted dogs and Sue McCafferty for fundraising.

Steve Wright for the Garden of Memories, Pani Koutsou for his dedication to education, Despina Stylianou for her compassion and Christina Negus for offering a helping hand.

The winners will be announced by this year’s honorary patron, Charalampous Theopemptou, and British High Commissioner, Matthew Kidd, at a special ten-year celebration ceremony due to be held at SEK in Paphos on December 16.

Every nominee will be given a certificate and a flower and the adult and junior winners will be given a hand crafted solid gold heart on a pin, created by Aphrodite Jewellers in Paphos and a number of other prizes, including a bouquet of flowers and a hamper of handmade treats by Joulietta Chocolatier. The adult winner will also be given a weekend break with dinner and spa treatment at the Almyra Hotel.
Cypriot artist Yiota Ioannidou is creating a Lifetime Achievement award and smaller versions for the Junior, Adult and Jasmitha Awards, which are all supported by Blevins Franks Cyprus, tax and wealth management advisers. Kivotos Gallery supports the Jasmitha award for Courage.

Father Christmas will hand out presents to the nominated children and entertainment will be provided by the Zingers and dance ensemble Romiosini.