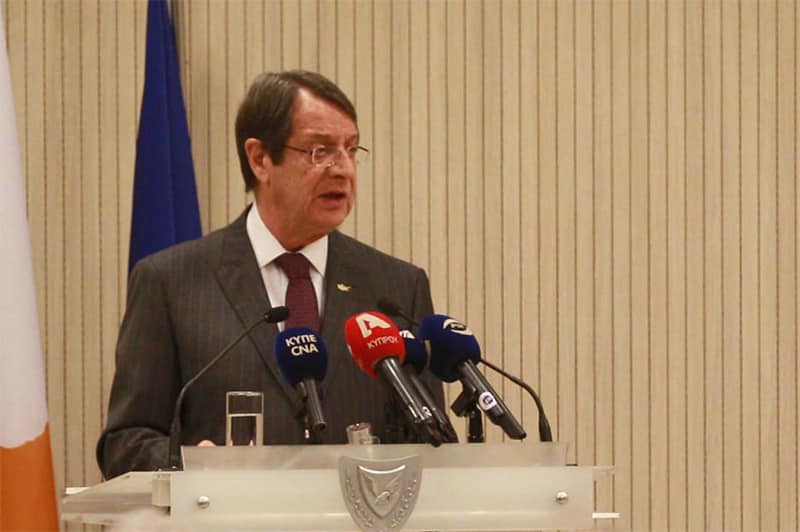 President Nicos Anastasiades will not seek to cut a deal with traditional kingmakers Diko in the run-off presidential election should its leader Nicolas Papadopoulos fail to get through the first round but will appeal to the electorate at large, he said in a televised interview that aired on Monday night on Alpha TV.

In the interview, Anastasiades said that such a negotiation would be pointless due to the party’s hardline stance on the Cyprus problem.

“There is a distance between us, to say the least,” the president said with a smile, which is why “I will appeal to the people”.

“If the leadership insists on views that I do not subscribe to, I will appeal to society at large. And then, I would have no problem co-operating with everyone. This is what I have said: it will be a term of consensus with all political power, when and where our views may meet.”

He denied the suggestion that he remains in contact with former Diko leader Marios Garoyian, whom some count as Anastasiades’ Trojan horse within the party, following their winning collaboration in the 2013 election.

“No, we do not have contacts with the so-called ‘unofficial’ Diko,” Anastasiades said.

“Nor with Mr Garoyian. We maintain a friendly relationship but we are neither in contact nor in co-operation.”

On Sunday, Garoyian gave a speech that signaled his long-expected outing as challenger to Papadopoulos, who unseated him in December 2013 and abruptly drove the party to hardline views on the Cyprus problem.

Meanwhile, a recent mass exodus of members of Solidarity, a party created after leader Eleni Theocharous left – Anastasiades’ – Disy, who invariably profess their allegiance to the president’s bid for re-election despite the party’s decision to back Papadopoulos, has unsurprisingly been linked to Anastasiades’ campaign.

“It is no secret that there are problems in many parties,” he said coyly in the Alpha interview.

“And the recent wave of departures from Solidarity – these are people who belonged to the Democratic Rally but voted for Mrs Theocharous, then they formed Solidarity, but now disagree with the party’s decision, hence the mass return.”

But the effort to subvert Solidarity – and, by extension, the Papadopoulos front – may also involve a much more intricate plot.

House President Demetris Syllouris, also a former prominent Disy member, left the party in 2004 in protest of the decision to support the Annan plan for a settlement of the Cyprus problem, creating a splinter party in hopes of making enough of a dent that Anastasiades might be forced out.

Instead, after some initial success in getting three members elected to parliament and even wining one of Cyprus’ six spots in the European Parliament, the party lost steam and Syllouris faced the real possibility that he might not be re-elected to parliament.

In January 2016, Theocharous had just decided to form Solidarity, comprising her own followers and what was left of Syllouris’ Evroko.

Six months later, Syllouris had not only clinched re-election to the House but was also voted House President with support by ruling Disy, rumoured to have been masterminded by Anastasiades.

Now, two months before the presidential election and with Solidarity dissidents identifying themselves as “former Evroko members”, which way Syllouris will lean remains to be seen.

“Demetris Syllouris does not support Anastasiades,” Solidarity’s chief of staff Panicos Kapsos told daily Phileleftheros in an interview on Monday.

“I assure you, Demetris Syllouris has expressed no reservation regarding the decision to support Nicolas Papadopoulos.”

“Besides, Demetris Syllouris’ views on the Cyprus problem are well-known, and they have always driven his decisions,” the senior Solidarity man said.

But in 2013, Syllouris opted to back Anastasiades against Akel-backed Stavros Malas in the run-off, urging Evroko voters to vote with their conscience in the first round.

He cashed in the support with a ministerial spot – with Nicos Kouyialis appointed to the Agriculture Ministry – and the post of deputy Attorney-General, which went to Rikkos Erotokritou until his incarceration over abuse of power.

Coronavirus: Half of hospitalisations are under 45 years old

Outrage over mass shooting of birds