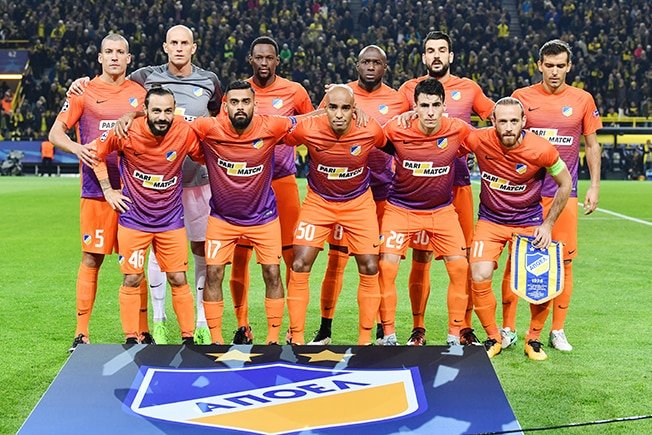 Apoel face Spurs at Wembley in the Champions League. The Cypriots need to better Dortmund's result against Real Madrid to advance to the Europa League knockout stage

Apoel are in London for their final Champions League group game of the campaign against Tottenham Hotspur with an outside chance of making it through to the Europa League.

Despite no wins in Group H, Apoel’s two draws against Borussia Dortmund sees them level on points with the Germans.

If Giorgos Donis’ men get a better result than Dortmund, who face a tough test at the home of reigning European champions Real Madrid, the Cypriots will finish in third place and enter the knockout stage of the Europa League.

Should the two sides get the same result, Dortmund would progress due to their superior number of goals scored and goal difference.

Tottenham already have first place wrapped up following their impressive 2-1 win in Dortmund on matchday five, which could tempt Mauricio Pochettino into a number of important changes to his starting line-up.

Spurs’ domestic form has taken a turn for the worst over the last few weeks, losing to rivals Arsenal and Leicester, and only managing draws against West Bromwich Albion and Leicester City.

The drop in form has coincided with the absence of influential defender Toby Alderweireld, who is out injured until the New Year. Midfield powerhouse Victor Wanyama remains absent and, although Argentine playmaker Erik Lamela has returned from a long-term injury, he was not registered for the Champions League at the start of the campaign.

Harry Kane scored a hat-trick against Apoel in the reverse fixture in Nicosia in September, in a 3-0 win for Spurs, but could be rested having recently returned from a hamstring injury.

Donis will also be without arguably his best defender as Brazilian centre-back Carlao is injured, as is full-back Zhivko Milanov. There is also some concern surrounding the fitness of winger Ghayas Zahid, who suffered a knock in the team’s last league game.

Apoel earned a hard-fought 2-1 win over Ermis on Friday night to move up to third place in the table, six points behind leaders AEK, having played two games fewer. Spurs, on the other hand, could only manage a 1-1 draw away at Watford on Saturday, a result that leaves them in sixth position.

Apoel’s away record does not instill confidence of a victory, but a draw may not be completely off the cards. The Cypriots have yet to win an away Champions League match beyond the qualifying campaign, but have drawn six of their 11 group games on the road.

Thousands of Apoel fans are expected to make the trip to Wembley on Wednesday in the form of the Cypriots who live in London, youngsters studying across the UK, as well as those travelling from Cyprus.

Many of them will have fond memories of the famous 2-2 draw at Stamford Bridge against Chelsea in 2009, and a similar result could see their European adventure continue into 2018.

The attention will be as much on the game at Wembley as it will be on the Santiago Bernabeu. Dortmund have been in poor form of late, which has seen them go from top of the Bundesliga to sixth place, and so Apoel will be hoping that slump continues at Real Madrid.

It is a big ask for Apoel to qualify but the Cypriots are known for defying the odds on the continent, and another chapter could be written on Wednesday.

Kim Kardashian West is the most searched celebrity on Bing