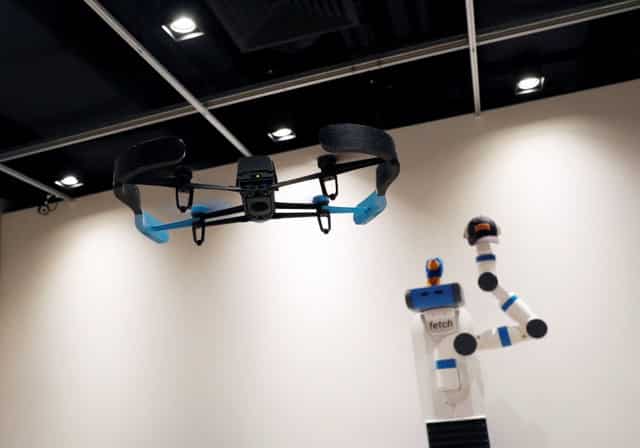 A drone takes photos of a robot during a demonstration of Xpose, an interactive drone photo-taking system, at the NUS School of Computing faculty premises in Singapore

As more people shoot pictures and videos from consumerdrones, researchers in Singapore have found a way round the frustrating task of framing and taking photos while manually piloting the craft.

More than 2.8 million consumer drones are expected to be sold this year, up from 2 million last year, says research firm Gartner. Most carry some kind of camera.

“We want to enable more intuitive and natural interaction with the flying drone to take photos autonomously – even for the novice user who has not used drones before,” said Ziquan Lan, one of four researchers behind the project.

Their innovation, called XPose, works in several stages. The user tells the drone to take photographs from different angles of the subject, such as a statue. Next, the shot is composed by moving objects on photos from a sample gallery.

Then the drone finds the best position to take the commissioned photo. No manual piloting of the drone is needed.

The researchers from the National University of Singapore say their prototype, based on a Parrot Bebop quadcopter, relies mainly on a single monocular camera and works reliably even when there is no GPS signal.

Some remotely controlled drones take their cue from global positioning system satellites, or GPS, which requires the drone pilot to know where the image is in respect to the drone, adding another layer of complexity to the process.

But XPose does away with that. The researchers said it had a higher success rate in photo-taking tasks than the usual touchscreen joystick interface.

“Drones will be even smaller (than they are now) so we can carry them around as a smartphone camera, throw it in the air and take photos for us,” Lan said, as he outlined his vision of the future.

But the problem is a thorny one, he said, adding that he and fellow researchers Mohit Shridhar, David Hsu and Shengdong Zhao went through dozens of methods and environments to evolve a working prototype.

Several companies are working to simplify how users take airborne pictures and videos.

A U.S.-based startup, Skydio, which aims for “flying cameras without the complexity”, is working on a drone that follows its operator using onboard cameras to capture a 360-degree view of its environs.

Another firm, Squadrone System, offers an “autonomous flying camera” called HexoPlus for $1,000. A user can program it via a smartphone app with simple instructions, such as “follow” or “hover close”.

For $700, the Mota Group offers the Lily Next-Gen camera drone that flies itself and hovers above the user, taking photos and video.