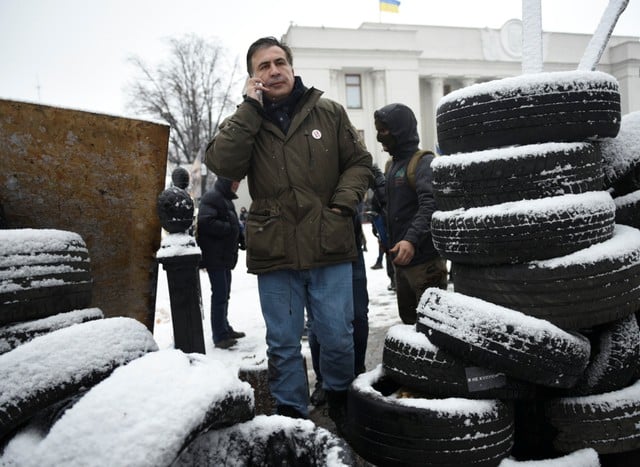 Dozens of Ukrainian police in riot gear raided a protest camp outside parliament on Wednesday in a failed attempt to detain former Georgian president Mikheil Saakashvili, who was freed from custody by supporters a day earlier.

Saakashvili later said police had searched the wrong tent at the camp, continuing a surreal hide-and-seek game between him and Ukrainian law enforcement ever since he barged across the border from Poland three months ago.

Saakashvili was granted Ukrainian citizenship and invited by President Petro Poroshenko to become governor of the Odessa region after the “Maidan” protests ousted a pro-Russian president in early 2014, but the two later fell out.

The saga threatens to embarrass the pro-Western leadership in Kiev, although Saakashvili’s party, which is now seeking to unseat Poroshenko at the ballot box, does not have nationwide support, opinion polls show.

Protesters defended the camp, which was set up in September, leading to clashes in which four policemen and an unknown number of civilians were wounded, Kiev police said in a statement.

General Prosecutor Yuriy Lutsenko later acknowledged that the operation could have been carried out more effectively, but said police had acted in accordance with the law.

“Saakashvili will be detained and the best thing he could do, if he were a man, if he really loved Ukraine even a little, would be to come today to Volodymyrska Street (security service headquarters) to testify to investigators,” he told parliament.

The situation near parliament was calm at around 1230 GMT, although an increased number of armoured police stood guard around the building, according to a Reuters witness.

Lutsenko has vowed to make all efforts to regain custody of Saakashvili, who was freed by his supporters from a police van in a chaotic scene on Tuesday after being detained on suspicion of assisting a criminal organisation.

In a televised briefing on Wednesday, Saakashvili – supporters see him as a fearless crusader against corruption — said he would not present himself to law enforcement officials, as requested by the General Prosecutor’s office.

“I am prepared to meet an investigator of the prosecutor in the tent city,” he said.

His detention was the latest twist in a prolonged feud between the Ukrainian authorities and Saakashvili, who has turned on his one-time patron Poroshenko, accusing him of corruption and calling for his removal from office.

Poroshenko’s office said prosecutors have evidence to back up the claims against Saakashvili, whom they accuse of receiving financing from criminals linked to former president Viktor Yanukovich who planned to overthrow the current government.

Saakashvili was stripped of his Ukrainian citizenship by Poroshenko in July while abroad and is now stateless. The 49-year-old is facing the threat of possible extradition to Georgia, where he is wanted on criminal charges he says were trumped up for political reasons.