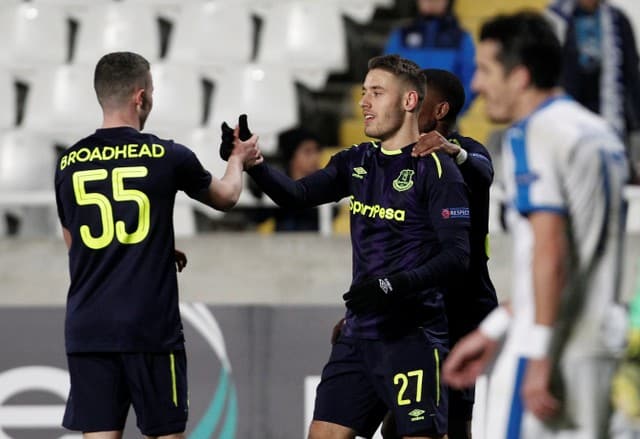 Apollon finished their Europa League campaign bottom of their group after a 3-0 defeat to Everton at the GSP Stadium on Thursday night.

There was little at stake for either side but the hosts needed just a draw to hold on to third place, yet they were overpowered by a second-string Everton team.

Apollon started the game with a golden chance. Fotis Papoulis was played in down the left by Nicolas Martinez but his strike sailed high and wide of the goal.

Minutes later, it was Everton with a great chance. Davy Klaassen threaded a pass to Ademola Lookman who showed great skill to cut inside his defender but lacked composure in the finish, blasting the ball straight at keeper Anastasios Kissas.

There would be nothing fortunate about Kissas’ next save. Moments later, debutant Henry Charsley curled the ball beautifully towards the far top corner but the Cypriot keeper tipped the effort wide with an outstretched left hand.

Eventually, however, Lookman got the goal his side deserved. Nikola Vlasic’s chip to the back stick found the youngster who headed home for the opener on 21 minutes.

Six minutes later, the same player netted again for 2-0. After a 26-pass move, the 20-year-old unleashed a thunderbolt from 30 yards which was too hot for Kissas to stop.

Apollon were presented a chance to halve the deficit but Adrian Sardinero’s strike was tipped over. Papoulis then forced the Spanish keeper into another good save from the edge of the area.

Seven minutes before the break, Apollon thought they had got one back when Papoulis glanced the ball into the net from Sardinero’s free-kick but the Greek striker was called offside in what was a close but correct decision.

From the start of the second half, Apollon continued their effort of getting back in it, this time Liverpool loanee Allan Rodrigues de Souza having a go from distance but was stopped by Robles.

The tempo had dropped considerably from thereon after, with very little action for either side who looked keen for the game to simply fizzle out.

One player who looked eager throughout, however, was Vlasic. The 22-year-old wrapped up the game with a neat finish three minutes from time.

Apollon finish the campaign on three points, as Everton leapfrog them into third with four points. Meanwhile, in the group’s other game, Atalanta sealed first place with a 1-0 win over Lyon.