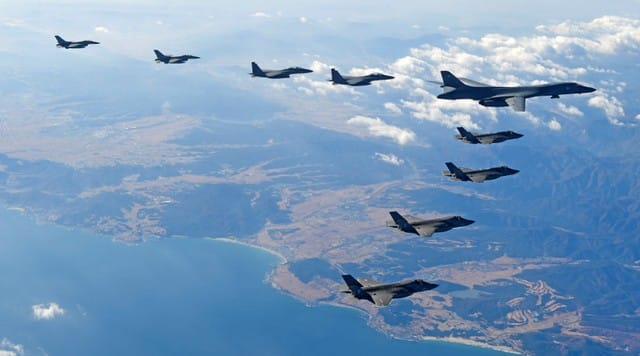 Two American B-1B heavy bombers joined large-scale combat drills over South Korea on Thursday amid warnings from North Korea that the exercises and US threats have made the outbreak of war “an established fact.”

The annual US-South Korean “Vigilant Ace” exercises feature 230 aircraft, including some of the most advanced US stealth warplanes. They come a week after North Korea tested its most powerful intercontinental ballistic missile (ICBM) to date, which it says can reach all of the United States.

“The remaining question now is: when will the war break out?” it said in a statement carried by North Korea’s official KCNA news agency.

“We do not wish for a war but shall not hide from it.”

China, North Korea’s neighbour and lone major ally, again urged calm and said war was not the answer, while Russian Foreign Minister Sergei Lavrov said North Korea wanted direct talks with the United States to seek guarantees on its security, something Moscow was ready to facilitate.

“We hope all relevant parties can maintain calm and restraint and take steps to alleviate tensions and not provoke each other,” Chinese Foreign Ministry spokesman Geng Shuang said.

“The outbreak of war is not in any side’s interest. The ones that will suffer the most are ordinary people.”

Lavrov said he had passed on Pyongyang’s desire for direct talks to US Secretary of State Rex Tillerson when the two met on the sidelines of a conference in Vienna on Thursday.

“We know that North Korea wants above all to talk to the United States about guarantees for its security. We are ready to support that, we are ready to take part in facilitating such negotiations,” Interfax news agency quoted Lavrov as saying.

Washington has said it remains open to talks if North Korea demonstrates it is serious about giving up its nuclear weapons, but that its recent activities showed it was not.

China’s Vice Minister of Foreign Affairs Zheng Zeguang was to meet Matt Pottinger, the head of Asian affairs at the White House’s National Security Council, on Thursday to discuss North Korea and trade, a senior US official said.

Tensions have risen markedly in recent months after repeated North Korean missile tests in defiance of UN sanctions and the detonation of what Pyongyang said was a hydrogen bomb on Sept 3.

North Korea’s latest missile test prompted a US warning that North Korea’s leadership would be “utterly destroyed” if war were to break out.

On Wednesday, a US B-1B bomber flew from the US Pacific territory of Guam to join the exercises, which will run until Friday.

In September, B-1Bs were among a formation of US military aircraft that flew further north along North Korea’s coast than at any time in the past 17 years, prompting Pyongyang’s foreign minister to warn that US bombers could be shot down even if they did not enter North Korean airspace.

Yang Uk, a senior fellow at the Korea Defence and Security Forum, said that while B-1Bs carried no nuclear weapons, they would be key to any strike targeting major North Korean facilities.

“B1-B bombers have been regularly dispatched to the Korean peninsula over the past years; however, it seems that the US Air Force might have enhanced its training to better prepare for actual warfare,” he said.

“That’s why North Korea has been making such a big deal when B1-B bombers are flying overhead.”

Both sides insist they don’t want war, but blame each other for provocations, while saying they will act to defend themselves.

US national security adviser H.R. McMaster said at the weekend that the possibility of war with North Korea was “increasing every day”. He said Trump was prepared to take action against North Korea but was working to convince China, Russia and other nations to put more pressure on Pyongyang to get it to give up its weapons programmes.

US Republican Senator Lindsey Graham urged the Pentagon on Sunday to start moving US military dependants out of South Korea, saying conflict with North Korea was getting close.

The Pentagon said it has “no intent” to move out any dependants.

“These confrontational war-mongering remarks cannot be interpreted in any other way but as a warning to us to be prepared for a war on the Korean peninsula,” he said.

A Russian lawmaker who met North Korea’s ambassador to Russia said on Thursday Pyongyang did not want to escalate tensions but did not fear war, the Interfax news agency reported.

North Korea regularly threatens to destroy South Korea and the United States and says its weapons programmes are necessary to counter US aggression. The United States stations 28,500 troops in the South, a legacy of the 1950-53 Korean War.

The rising tensions coincide with a rare visit to North Korea by United Nations political affairs chief Jeffrey Feltman this week, the highest-level UN official to visit North Korea since 2012.