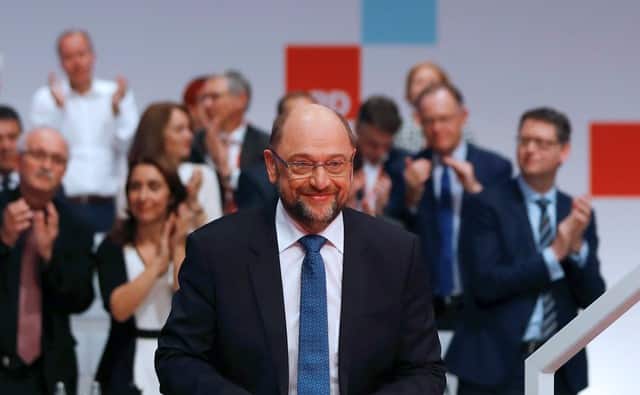 The leader of Germany’s Social Democrats (SPD) urged his party on Thursday to push for the creation of a “United States of Europe” and keep open the option of helping Chancellor Angela Merkel form a new government.

Germany, Europe’s economic powerhouse, has been struggling to build a new government since Merkel’s conservative bloc and the SPD shed support in a September election in which the anti-immigrant AfD party surged into parliament.

Martin Schulz urged members of the centre-left SPD to be open to Merkel’s overtures to renew the coalition that has governed for the past four years, saying the party had a responsibility to revive social democracy in Germany.

A new “grand coalition” with the reluctant SPD is Merkel’s best hope of extending her 12 years in power after talks with two smaller parties failed.

“The question isn’t grand coalition or no grand coalition,” he said, “Nor minority government or fresh elections. No – it’s about how we exercise our responsibility, including to the next generation.”

Schulz said the party would only recover if it could offer a clear vision of a Germany and a Europe that worked for their citizens, calling for deeper European integration and a “United States of Europe” by 2025.

“Europe does not always work for its people, rather too often for the big companies,” he said.

Schulz, who initially said his party should go into opposition after being punished for participating in the previous grand coalition under Merkel, apologised for his party’s disastrous electoral result.

“When states can’t balance their budgets they face draconian sanctions from Brussels. If we can mobilise billions for bank rescues but have to fight for paltry sums to support jobs for young people, then this is definitely not my Europe.”

He struck a tone that was more critical of big companies than French President Emmanuel Macron, who is pushing for deeper eurozone integration and pro-business reforms under a eurozone finance minister.

He took aim at US technology firms Apple, Facebook and Google, saying a strong Europe was needed to make them stick to the rules and protect the rights of workers in a changing economy.

“We don’t want an app-directed service society but we want digitalisation to lead to more individual freedom,” he said to applause, calling for steps to protect the digital economy’s self-employed from becoming “self-exploiters”.

The party’s congress is due to vote on Thursday evening to authorise talks on forming a new government, including the possibility of a cooperation which could fall short of a formal coalition.

If Schulz fails to get support to discuss continuing the grand coalition, then the whole leadership of the SPD would be up for debate, Carsten Schneider, party whip in parliament, told German radio.

In a motion for the congress, the youth wing said the SPD had a “historical responsibility” not to enter government since the far-right Alternative for Germany (AfD) party, which came third, would then become the official opposition.

On the issue of immigration, one of the main reasons for the collapse of Merkel’s first attempt at a coalition, the SPD opposes a conservative plan to extend a ban on the right to family reunions for some accepted asylum seekers.

“There can be no upper limit to the right to protection from war and persecution,” Schulz told delegates, rejecting conservative demands for a ceiling of 200,000 immigrants a year.