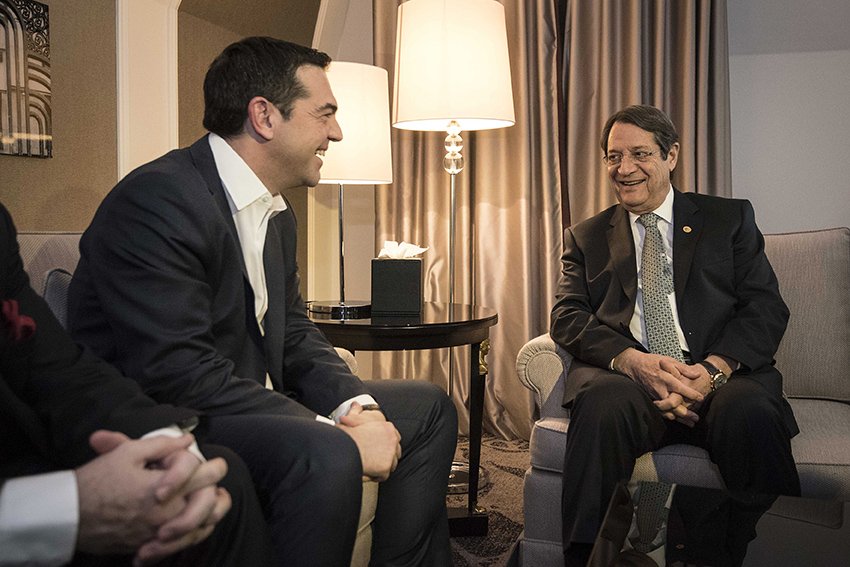 President Nicos Anastasiades will be briefed in detail by Greek Prime Minister Alexis Tsipras about Turkish President Recep Tayyip Erdogan’s visit to Athens, on the sidelines of the European Council, to be held next week in Brussels.

Government Spokesman Nicos Christodoulides said on Friday that a clear picture of Erdogan’s visit would be formed then though there would be phone communication between Anastasiades and Tsipras in the meantime. Next week, he added, Anastasiades would be meeting with Tsipras in Brussels, on the sidelines of the European Council, for a more detailed briefing.

Christodoulides said that public statements made during the Tsipras-Erdogan meeting in Athens on Thursday contained elements that were worth commenting on, such as Erdogan’s effort to equate the responsibilities of Turkey with those of Greece. Erdogan continued his visit to Greece on Friday.

During their joint statements on Thursday, the leaders of Greece and Turkey held on to their respective positions on Cyprus. Erdogan said no foreign troops would be stationed on Cyprus today had the Greek Cypriots voted for the Annan Plan in 2004. Greece and Turkey, he said, are the “mother countries” and guarantors of Cyprus, and both nations desire a just and viable solution.

Referring to the reunification talks in Switzerland earlier this year – which ended in stalemate over disagreements on security and guarantees – Erdogan said it was the Greek Cypriots who walked out.
“It is in this context that the Greek Prime Minister replied with a reference to the Turkish invasion in Cyprus,” Christodoulides said.

The third point, he said, was Erdogan’s reference to Turkey’s wish for a viable solution of the Cyprus issue. “We have not heard what we heard after Crans-Montana regarding a plan B and plan C. Beyond that, the gravity that we must all possess in our approach to the Cyprus issue leads us to wait until we are briefed extensively and then make more specific statements,” he added.

Political party responses to the Erdogan visit were muted. Akel said “as expected”, there were no significant developments on Cyprus but Tsipras had raised the issues within the correct parameters, those of invasion and occupation. Turkey also needed to put its claimed desire for a solution into practice, the party said.

“He attempted to close the Cyprus issue by stressing that Greek Cypriots would not get anything more than the Annan plan,” she said. “He comes across as a neo-sultan”.

The many faces of our Goddess Aphrodite