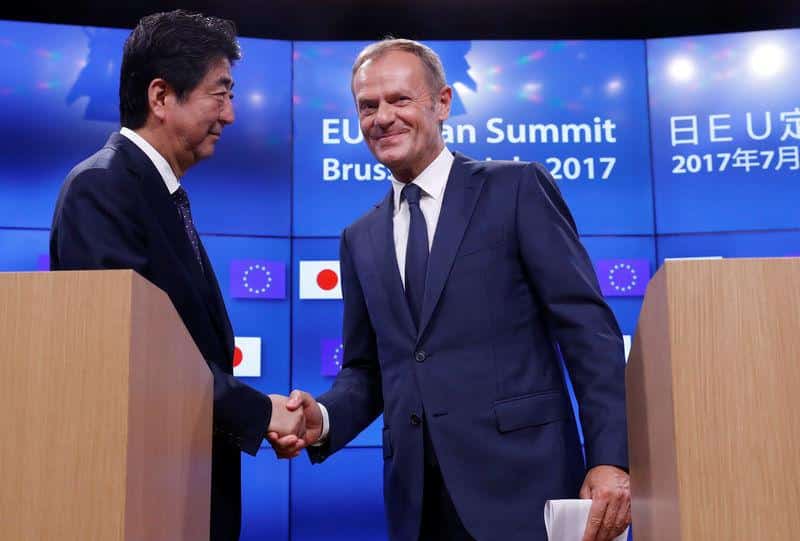 The European Union and Japan concluded negotiations on a free trade deal to create the world’s largest open economic area, signalling their rejection of the more protectionist stance of US President Donald Trump.

The two parties, who agreed the outlines of a deal in July, said on Friday negotiators had now finished a legal text that would open up trade for economies making up about 30 percent of global output.

“Japan and the EU will join hands and build a free, fair and rule-based economic zone, which will be a model of an economic order in the international community in the 21st century,” Japanese Prime Minister Shinzo Abe told reporters.

Japan had been one of the signatories to the planned Trans-Pacific Partnership, a massive 12-nation trade alliance that Trump ditched on his first day in office. Abe said a “new era” would now start for the EU and Japan.

The deal, combining the 28-nation bloc and the world’s third largest economy, will remove EU tariffs of 10 per cent tariffs on Japanese cars and the 3 per cent rate typically applied to car parts.

For the EU, it will scrap Japanese duties of some 30 percent on EU cheese and 15 percent on wines as well as allowing it to increase its beef and pork exports and gain access to large public tenders in Japan.

“This is the biggest trade agreement we have ever negotiated for the European Union,” EU trade chief Cecilia Malmstrom said. “It sends a powerful message in defence of open trade based on global rules.”

In the past five months, negotiators worked on stabilising tariffs in services, regulatory cooperation and the means to protect food and drink categories so that, for example, only sparkling wines from a specific Italian region can be called prosecco.

Discussions will continue on the contentious issue of investor protection. Japan has been reluctant to adopt the investment court system the EU has devised as an answer to fierce criticism that disputes between foreign companies and states should not be settled by opaque tribunals.

“This needs further discussion at the beginning of next year but the rest of the agreement is there,” Malmstrom said, adding this element of the deal could be added on later.

The European Union is also hoping to seal free trade agreements with the Mexico and the Mercosur bloc of Argentina, Brazil, Paraguay and Uruguay. Talks on the latter will take place on the sidelines of a World Trade Organization meeting starting on Sunday.

“The fact that we manage to finalise this today when we and Japan go to Buenos Aires sends a powerful signal that we can make good trade agreements that are win-win,” she said.