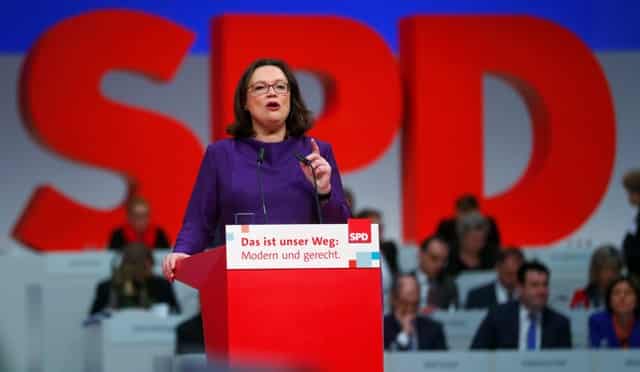 A senior member of Germany‘s Social Democrats (SPD) said her party would start talks next week with Chancellor Angela Merkel’s conservatives on forming a governing coalition, a move that could end a political impasse in Europe’s largest economy.

The SPD voted on Thursday to open discussions with the conservatives despite having earlier pledged to go into opposition after suffering its worst election result in the post-war era in September.

The consultations – between Merkel, her Bavarian ally Horst Seehofer and SPD leader Martin Schulz, as well as the parliamentary leaders of the three parties – will begin in Berlin on Wednesday evening.

The result of the talks remains open and a “grand coalition” between the SPD and conservatives was no foregone conclusion, Andrea Nahles, the SPD’s parliamentary leader, told Deutschlandfunk radio on Friday.

“It’s no more and no less than having talks,” Nahles said. “It’s not automatic that we’ll end up in a grand coalition – rather tough discussions will be necessary, and I don’t know what the conservatives are prepared to work with us on.”

Merkel, who has been at the helm in Germany for 12 years, hopes the SPD will agree to a re-run of the grand coalition that has governed Germany for the last four years. She was forced to turn to the SPD after talks with the environmentalist Greens and liberal Free Democrats (FDP) on a three-way alliance collapsed.

Her conservative bloc has welcomed the SPD’s decision to start initial talks. They would still need to decide later whether to proceed to full-blown coalition talks.

The majority of Germans (70 per cent) expect a grand coalition to form, a Forsa poll for broadcaster ZDF showed on Friday.

It found almost half of Germans (47 per cent) would be happy with such an alliance. Around a third (36 per cent) disapproved of another conservative alliance, which would make the far-right Alternative for Germany (AfD) the biggest opposition party.

The SPD gained two points in the Forsa poll to 23 per cent; the conservatives shed a point to 32 per cent.

Merkel’s conservatives and the SPD both saw their vote share shrink in September elections, complicating the coalition arithmetic. Their coalition remains in place as a caretaker government.

Nahles said the SPD had not set any conditions for joining a coalition with the conservatives, adding: “You don’t go into negotiations with a huge backpack full of red lines.”

But she said the SPD had laid out key points, including getting rid of Germany‘s two-tier public and private health system – an idea the conservatives oppose.

Seehofer, leader of Bavaria’s arch-conservative Christian Social Union (CSU) – the sister party to Merkel’s conservatives – said his party would not agree to that, telling magazine Der Spiegel he could not imagine how such a system could be implemented without causing “profound injustices”.

Seehofer also rejected Schulz’s idea to create a United States of Europe by 2025, saying that would “certainly remain a utopia”.

On the issue of immigration – which was behind the collapse of the talks between the conservatives, Greens and FDP – Nahles said the SPD needed to “take the bull by the horns”.

Speaking at the SPD party congress on Friday, she said Germany needed an immigration law but also a realistic recognition of the difficulties that some municipalities face in integrating refugees.

Anastasiades-Tsipras to discuss Erdogan’s visit to Greece, in Brussels (Updated)