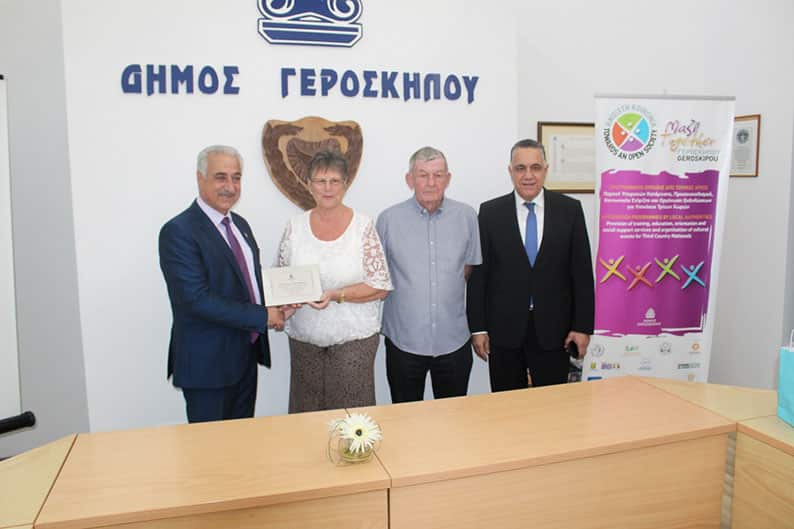 Two British holidaymakers who have visited various Constantiou Bros hotels in Geroskipou in Paphos more than one hundred times have been awarded a plaque by the mayor and the group’s general manager.
John and Carole Morley have stayed in the area one hundred and four times during the last twenty-five or so years, and keep coming back time and again, the groups’ general manager, Aristos Diomedous told the Cyprus Mail.
“They have stayed at a number of our hotels, including the Athena and the Pafian Bay, since 1992 and they are booked to stay with us again in March 2018, which will bring the total up to 105 visits with us,” he said.
A celebration to mark the occasion was recently held at Geroskipou municipality, when, at the invitation of the mayor, Michalis Pavlides, the couple’s loyalty was rewarded with a special plaque and a gift.
“I presented the award to them, which was nice,” said Pavlides, “We cooperate with our hotels so that every year we present gifts to repeat customers that stay more than fifty times. This couple were more than double that.”
He added that he is pleased that so many customers are choosing to return to the area year after year.
Diomedous, who is also the vice president of the hotels managers’ association said that many hotels all over Cyprus rely on such customers and that they are of huge importance in the industry.
“These people are what we need to invest in and they will help us to expand our seasonality issues as they chose to stay all year round, not just during the summer months,” he said.
He also said that the couple, as is the case with many other ‘repeaters’, form friendships with other customers and tend to book their holidays at the same time so that they may meet up again.
He noted that this Constantiou hotel ‘fan club’ are a valuable asset to the group and would be at any hotel.
“During September this year, seventy per cent of our customers at our Athena Royal hotel were repeat customers and in our other hotels, at various times, this sector makes up around forty five to fifty per cent of our guests,” he noted.
The industry expert said that the key to repeat custom is quality, hospitality, regular customer contact and showing them that they are appreciated, important and valued.
“Offering value for money is also a must,” he said.