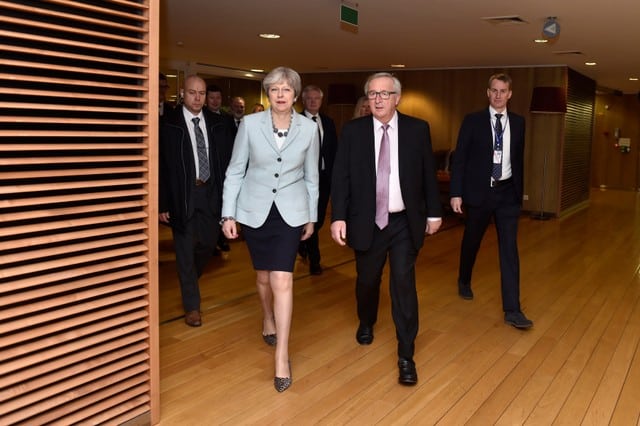 Britain and the European Union struck a divorce deal on Friday that paves the way for talks on trade, easing pressure on Prime Minister Theresa May and boosting hopes of an orderly Brexit.

The European Commission said “sufficient progress” had been made after London, Dublin and Belfast worked through the night to break an impasse over the status of the Irish border that had scuppered an attempt to clinch a deal on Monday.

PM May, speaking in Brussels, said the deal opened the way for talks that would bring certainty to Britain‘s future after quitting the EU.

European Council President Donald Tusk cautioned, though, that while breaking up was hard, building a new relationship would be even harder.

“So much time has been devoted to the easier part of the task,” Tusk said. “And now, to negotiate a transition arrangement and the framework for our future relationship, we have de facto less than a year.”

One senior banker said the deal signalled Britain was heading towards a much closer post-Brexit relationship with the EU than many had feared, indicating that trade will keep flowing between the world’s biggest trading bloc and its sixth-largest national economy.

The Commission gave its verdict in a statement after May took an early-morning flight to Brussels to announce the deal alongside Commission President Jean-Claude Juncker at a news conference just after 0730 local time.

Sterling climbed to a six-month high against the euro on Friday, with one euro worth 86.9 pence, and bond yields across the eurozone rising in early Friday trade. Against the US dollar the pound hovered near a four-day high against a backdrop of broader dollar strength.

Moving to talks about trade and a Brexit transition was crucial for the future of May’s premiership which was thrown into doubt when she lost her party its majority in a snap election in June.

Pro-Brexit Conservative lawmakers rallied around her after the deal, a possible signal that the party – which has been split over EU membership for generations – was not preparing to ditch her immediately.

British Foreign Secretary Boris Johnson, who spearheaded the Brexit campaign, congratulated May, adding that Britain would now take back control of its laws, money and borders.

The Commission’s recommendation that sufficient progress has been made will now go to an EU summit of leaders on Dec 14-15.

“Prime Minister May has assured me that it has the backing of the UK government. On that basis, I believe we have now made the breakthrough we need. Today’s result is of course a compromise,” Juncker told the hastily-arranged news conference.

May said she expected a formal agreement to be approved at the summit.

“I also look forward to next week’s European Council meeting, where I hope and expect we will be able to get the endorsement of the 27 (member countries) to what is a hard-won agreement in all our interests,” May said.

The commission will now begin work on phase two talks, which cover a transitional exit period, trade and long-term relations with the bloc.

Draft guidelines showed the transition period would last around two years. During that time, Britain will remain part of the customs union and single market but will no longer take part in EU institutions or have a vote. It will still be subject to EU law.

May’s key parliamentary ally in Northern Ireland gave a cautious endorsement of the new terms, four days after 11th-hour objections from Belfast scuppered May’s attempt to sign off on an accord over the Irish border.

In the text, Britain agreed that should London and Brussels fail to agree a final Brexit deal, the United Kingdom will maintain “full alignment” with those rules of the internal market and customs union that help protect north-south cooperation in Ireland.

It said in the absence of a trade deal, no new barriers would develop between Northern Ireland and the rest of the United Kingdom unless the devolved government in Northern Ireland agree that distinct arrangements are appropriate.

Irish Foreign Minister Simon Coveney said the border agreement meant there was no way Brexit could lead to a hard border between Ireland and Northern Ireland – which will be the only land frontier between Britain and the EU after Brexit.

“Very good outcome for everyone on the island of Ireland – no Hard Border guaranteed!,” Coveney said on Twitter.

Not everyone agreed. “A deal in Brussels is good news for Mrs May as we can now move on to the next stage of humiliation,” leading Brexit campaigner Nigel Farage said on Twitter.

Hellenic approves 220 applications for VRS to save €14m a year