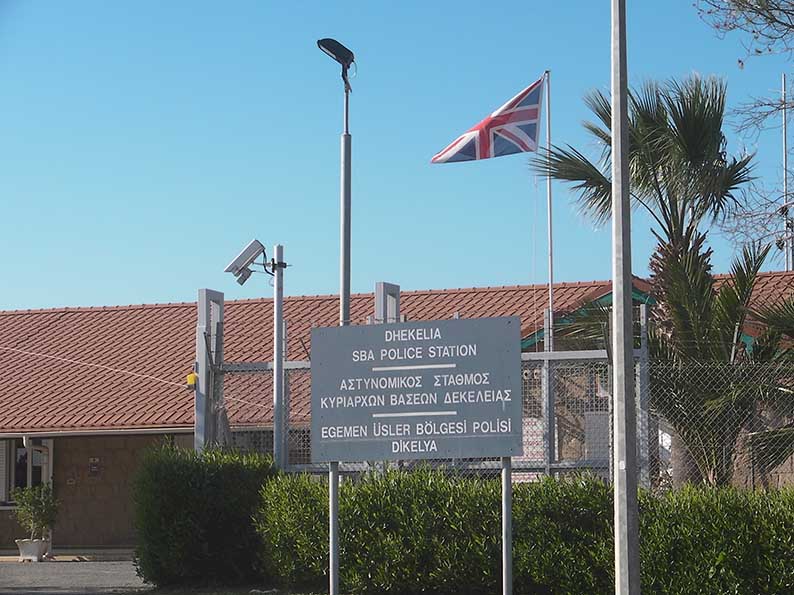 The Council of Europe’s Committee for the Prevention of Torture (CPT) on Friday issued its first-ever report on conditions of detention and the treatment of people held by the SBA Police and British Forces Cyprus in various locations including police stations.

The report assesses conditions of Her Majesty’s Prison at Dhekelia and military detention facilities. It also briefly examines the situation of migrants held within the SBA. The review was carried out after a visit by the CPT in February 2017.

It found that the CPT received no allegations of mistreatment by SBA police officers or police staff at Dhekelia prison, and detainees appeared to be treated well.

However, concerning the police, the CPT highlighted delays in providing access to a lawyer, long periods of remand custody at Kolossi Police Station and poor conditions of detention at Dhekelia Police Station.

The report also says that the police should no longer use the “16 Flight” aircraft hangar as a place of detention, expressing particular concern about the detention of young children and infants there.

“The poor material conditions of “16 Flight” rendered it unsuitable as a place of detention and it should be removed permanently from the list of “designated places of detention”. The Committee is particularly concerned about the reports of the use of “16 Flight” for the detention of young children and requests details of the legal basis for their deprivation of liberty,” the report said.

In their response, the bases said, citing an earlier response to the committee, that no individuals under the age of 16 were detained at 16 Flight during the period in question. A number of adults, who had been detained, chose to be accompanied by their children during their own short periods of detention, in the absence of other suitable arrangements to care for their children, they said.

“None of those under the age of legal responsibility were “deprived of their liberty” and they were free to leave at any point should alternative arrangements have been made by their parents for their care. It was the decision of their parents and not an act of the SBAA authorities that led to them accompanying their parents to the temporary facility at 16 Flight,” they added. “Special measures were taken to improve the facilities accordingly and to provide for their comfort and care. As part of this process the facility was inspected by social welfare experts and further adaptations made to provide for their care and support.”

With regard to Dhekelia prison, the report raises concerns about the nature of the accommodation, the lack of organised activities and the “totally inadequate” regime for prisoners serving long sentences, as well as the lack of medical confidentiality and unsafe distribution of medication. It recommends that a full review should be carried out as to whether the facility remains viable under its current model of operation.

The report said the only life-sentenced prisoner in Dhekelia lacked any structured sentence plan, had no opportunities to exercise personal responsibility in daily prison life, no prospect of progression, no regime tailored to his needs and there were no formal psycho-socio support mechanisms in place. “The authorities should cease to hold prisoners serving life-sentences at HMP Dhekelia until the establishment is able to offer a proper regime including a tailored sentence-planning system, as well as the provision of adequate psycho-social support,” said the report.

The CPT recommended that the prison should be run by fully qualified specialist prison staff reporting to authorities that are separate from the police, and that a full review be swiftly conducted into whether HMP Dhekelia remained viable as a prison.

In their response, bases authorities accepted some of the recommendations but said the SBA Administration “would prefer not to hold long-term prisoners at HMP Dhekelia for the full duration of the sentences, and are actively working with the UK government and others to identify alternative arrangements”.

Arrangements were already in place for Cypriot nationals to request to serve their sentences at the larger prison in the Republic of Cyprus should they wish to do so, the bases said, adding that Cypriot nationals account for the majority of those individuals likely to be detained at  Dhekelia. “For those small numbers of individuals who are not entitled transfer, including one current individual at the prison, the SBAA are currently in discussion with the UK and others to identify a more appropriate facility for them to serve the majority of their sentence,” the bases said.

Regarding military detention, which includes civilians subject to service discipline, the CPT recommended that the location and movements of people detained by the Cyprus Joint Police Unit should be fully recorded. The CPT also highlights concerns about the right of access to a lawyer, the functioning of the complaints system and the regime for detainees. It also asks for information on any plans to professionalise staffing at the Service Custody Facility.

Jack Whitehall is to host the Brit Awards in 2018

Japan priestess stabbed to death at shrine in ‘family feud’