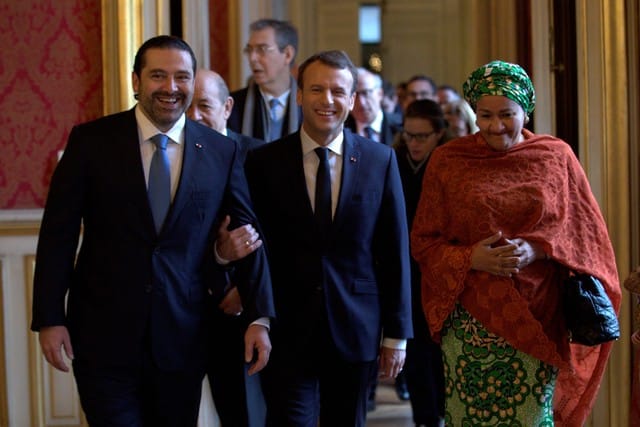 World powers will try to shore up Lebanon‘s stability on Friday by pushing Saudi Arabia and Iran to stop interfering in its politics and urging Hezbollah to rein in its regional activities.

Lebanon plunged into crisis on Nov 4 when Saad al-Hariri resigned as prime minister while he was in Saudi Arabia, saying he feared assassination and criticising the Saudis’ regional arch-rival Iran along with its Lebanese ally Hezbollah.

After international pressure and negotiations between Lebanese political factions, he rescinded his resignation on Tuesday and his coalition government, which includes Hezbollah, reaffirmed a state policy of staying out of conflicts in Arab states.

The International Lebanon Support Group (GIS), a body that includes the five members of the UN Security Council – Britain, China, France, Russia and the United States – were meeting in Paris on Friday to try to reinforce Hariri’s hand to prevent a new escalation.

“For Lebanon to be protected from regional crises it’s essential that all Lebanese parties and regional actors respect the principle of non-interference,” French President Emmanuel Macron said at the opening of the meeting, which Hariri and US Secretary of State Rex Tillerson are also attending.

“The meeting today must show the will of international community to see the policy of regional disassociation put into place effectively by all in the country,” he said.

Macron had leveraged France’s close relations with both Lebanon and Saudi Arabia to secure a deal that saw Hariri travel to Paris and open the door to a resolution of the crisis last month.

Saudi concern over the influence wielded by Shi’ite Muslim Iran and Hezbollah in other Arab states had been widely seen as the root cause of the crisis, which raised fears for Lebanon‘s economic and political stability.

The Lebanese policy of “dissociation” was declared in 2012 to keep the deeply divided state out of regional conflicts such as the civil war in neighbouring Syria. Despite the policy, Hezbollah is heavily involved there, sending thousands of fighters to help Syrian President Bashar al-Assad.

“The keyword of the final declaration will be to support the disassociation policy,” a senior French diplomat said.

He said that while the diplomatic language for the final declaration would not single out any party, the message was that Saudi Arabia and Iran should not influence Lebanese politics and that Hezbollah should rein in its regional activities.

Highlighting the difficulties of upholding such a policy, Hezbollah backed calls on Thursday for a new Palestinian uprising in reaction to US President Donald Trump’s recognition of disputed Jerusalem as Israel’s capital.

“The disassociation policy is driven by my government and adopted by all its political components and will allow us to maintain our national unity,” Hariri said alongside Macron.

“The stability of Lebanon may seem like a small miracle given the many conflicts that destabilise the region, but it is maintained at the cost of sacrifice, dialogue and compromise,” Hariri said.

Those attending Friday’s meeting are also set to back efforts to strengthen the Lebanese army, set up an investment conference for Lebanon once legislative elections take place, support economic reforms and the country’s handling of millions of Syrian refugees.