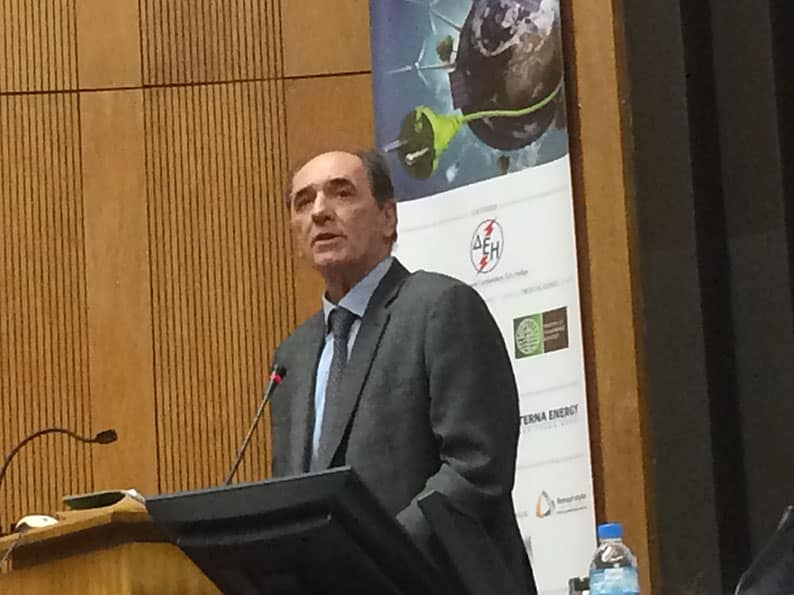 The Energy market in transition was the title of the 22nd national energy conference held in Athens last month and attended by more than 300 delegates – heads of all energy institutions in the country, universities and CEOs of the leading energy companies and leading international participants.

The transformation of the Greek energy market emerged as the dominant topic of the conference. In his keynote speech Minister of Environment and Energy, Giorgos Stathakis confirmed that the ministry is preparing a long-term energy plan to 2030, which will present the policy and basic strategic directions of national energy planning.

This is in response to a requirement by the European Commission (EC) that obliges each member state to produce a draft, integrated, national plan for energy and climate by January 1, 2018, covering the 2021-2030 period, with binding commitments on carbon emissions reduction, adoption of renewables and energy efficiency. Following review by the EC, the binding plan should be submitted by January 1, 2019.

Stathakis said that Greece’s plan will address security of supplies, reduction of energy demand, opening-up of the energy market, setting up energy communities, development of hydrocarbons, internal and external interconnections and reduction of energy poverty. A main aim is to turn Greece into a regional energy hub.

Greece is embarking on a new system for awarding renewables contracts based on competitive auctions, expected to deliver lower costs. Liberalisation of the power sector means that Greece’s Public Power Corporation (PPC) will continue to be an important pillar of Greek energy, but will be transformed into an international energy services company.

Natural gas will be important during energy transition but also in terms of providing energy security. Liberalisation of the gas market will progress in 2018, with DEPA remaining important but losing its present dominant role. Lignite will continue to be part of Greece’s energy mix, but will be reduced by 2030.

Greece has drafted a law, now being reviewed by parliament, to open up energy production, especially renewables, to all energy users, from individuals, to local authorities, to companies, etc. Greece is implementing EU regulations and guidelines to open up its renewables market. It sees energy as a key driver for economic recovery.

Stathakis was followed up by Brent Wanner, Senior Energy Analyst with the International Energy Agency (IEA), who spoke about the global shift to renewable energy sources. This is leading to a future of affordable, secure and sustainable energy. Use of fossil fuels, especially coal, will decline, but will still be providing about 50 per cent of global energy by 2040. US shale oil and gas is changing the dynamics of the global energy markets.

The strategy for future energy and sustainable development globally requires:

Natural gas and LNG will be important, he said, but new developments and cheap solar PV are creating uncertainties for gas. It has potential, but it is highly contingent on controlling prices. These must remain competitive against other competing fuels, such as cheap coal and renewables.

Wanner also presented the key points from the World Energy Outlook 2017 published this month by the IEA. It should be noted that Athens was chosen this year by IEA as one of the 10 capital cities worldwide for the official presentation of this important IEA annual study. Key points were:

These changes mean that old ways of understanding the world of energy are losing value as countries’ needs and fuel sources change roles.

Pantelis Kapros, director of Institute of Energy for SE Europe which organised the conference, said that the EU’s ‘2016 Winter Package’ set the scene for energy goals in Europe in the period to 2030. These are critical to future energy transformation in the EU and its member states. Many countries have responded to this, but Greece has not yet embraced change fully. PPC needs to change soon. Greece has too many open fronts that need to be sorted out, including lignite, PPC, natural gas and privatisations.

The PPC issue was taken up by Emmanuel Panayiotakis, CEO of PPC, who referred to the distortions of the energy market and the new role that the company has to play. Even though he agreed that complete reorganisation of Greece’s energy market is needed, more than 50 per cent privatisation of PPC is unnecessary. He also said that Greece’s energy market is facing a huge burden from old renewables subsidies. Upgrading the transmission system is critical – it needs change to accept renewables and smart meters. Future challenges include embracing new technology and adapting to an increasingly electrified future.

Efstathios Tsotsoros, chairman of Hellenic Petroleum, reported that the group is “emphatically present in the undertaking of the productive reconstruction of Greece”. The Group aims, among other things, to increase profitability, where for the third consecutive year profits will move to a historic high, now exceeding €800 million, and stabilizing high cash flow. He was critical that in Greece plans are set but are not effectively implemented and targets are not being achieved. He was also critical of current offshore hydrocarbon bidding and licensing practices. He suggested that these require a complete overhaul, simplification and a new system of oversight.

Giorgos Polychroniou, director DEPA, talked about the important changes that took place in the wider natural gas market in Greece, as well as to the four main pillars for the operation of an efficient gas market: fair and effective competition, security of supply, market expansion, outward-looking and interconnection. Full legal separation between gas supply and distribution took place on 1 January 2017, with further liberalisation of gas supply planned for 2018. By 2020 DEPA’s share of the Greek gas market will shrink to 50 per cent.

Greek gas demand is increasing, driven by power generation and low global gas prices, but even then there is large potential for further gas penetration.

New gas infrastructure and pipelines are turning Greece from a destination to a transit country. This is providing DEPA with opportunities to become outward-looking by participating in international projects. These include the TAP, IGB and EastMed gas pipelines.

Polychroniou was supportive of natural gas and power sector reforms, which contribute to the creation of a competitive energy market in Greece and the reduction of energy costs.

The CEO of the Hellenic Hydrocarbons Resources Management, Yiannis Basias, referred to the positive prospects for exploration and exploitation of hydrocarbons in western Greece and the west and southwest of Crete.

Nektaria Karakatsani, a member of the Regulatory Authority for Energy, referred among other things to the new reality created by the increasing penetration of renewables. She pointed out that more than €1 billion of investment will be needed to modernise Greek networks and improve systems. As far as market regulators are concerned, she emphasised that the challenge is to make the costs as low as possible for consumers.

An extensive reference to energy security issues and long-term energy planning developments was made by the Secretary General for Energy and Mineral Resources Michael Verriopoulos. And the President of the Energy Regulatory Authority, Nikos Bulaxis.

The focus was also on hydrocarbon exploration in Greece and the East Med, with presentations from Ioannis Grigoriou, director Hellenic Petroleum, Dinos Nikolaou, Technical Advisor Energean, and Charles Ellinas, CEO of eCNPC who briefed the conference about developments in the East Med and the challenges posed by a very competitive global energy market.

Energy transformation is gripping Greece, affected by developments in Europe. But in Cyprus the process is painfully slow. With no change, the cost of electricity is the 11th highest in Europe. This is a burden on households, businesses and industry, as well as impacting economic growth. Wider adoption of renewables, through competitive auctions to keep prices low, could help bring this cost down, but so far the process has been slow and limited in scope.

What is the status of Cyprus’ National Energy Plan to 2030? The draft is supposed to be ready for submission to the European Commission by January 1, 2018, following public consultation. Even Greece is catching up with this. Italy’s plan is already complete.

Such a plan is expected to include binding energy and climate targets with serious implications for Cyprus’ future energy and economy. What preparation has been made to deliver the draft on time. Does this exist and when is serious public consultation going to take place? How will this be achieved by the end of 2017?

This plan is very important, with targets for carbon emissions, adoption of renewables and energy efficiency binding until 2030, with a major impact on Cyprus. These targets will bind the next three governments and will have significant economic implications and penalties if they are not achieved.

The inertia that exists and the lack of any serious energy planning and consultation, leaves Cyprus unprepared and exposed.

Tax evasion and money laundering: ‘no time for complacency’