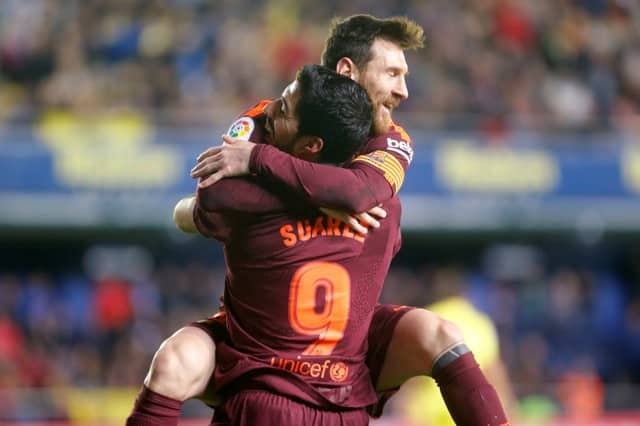 Luis Suarez and Lionel Messi fired Barcelona to a 2-0 victory over 10-man Villarreal as the leaders won for the first time in three La Liga games to stay five points clear on Sunday, while Atletico Madrid edged Real Betis 1-0.

Barca looked set for a third consecutive league draw as they created scant opportunities but they were presented with the advantage of an extra man when Villarreal midfielder Daniel Raba was given a straight red card for a wild, studs-up challenge on Sergio Busquets on the hour mark.

Barca did not take long to cash in and Suarez broke the deadlock in the 72nd minute, rounding goalkeeper Sergio Asenjo to complete a move of quick passes by Messi, Jordi Alba and substitute Paco Alcacer.

The visitors stretched their lead 11 minutes later with the help of a haphazard backpass from Victor Ruiz to Busquets, who played in Messi for his 14th league goal this campaign.

Barca lead the standings on 39 points, five clear of second-placed Valencia and six ahead of Atletico in third, while champions Real Madrid are fourth on 31.

Villarreal coach Javi Calleja said the red card was unfair on his side.

“We were playing well and managing the periods of the game but everything changed with the red card,” he told reporters.

“From the sidelines it didn’t look like a red card and I’m certain that if it had been the other way round it wouldn’t have been a sending off. Raba has been punished for being a young guy.”

Barca coach Valverde said the red card was fair and praised his side for taking advantage.

“It looked a strong challenge to me and I think the player (Raba) realised it was an excessive challenge. The player was shocked and didn’t protest,” he said.

“They were well positioned and closed down all the spaces. They were dangerous on the counter, it was a game that could have gone uphill for us but we got the job done.”

Earlier, a goal by Saul Niguez racked up a third straight victory in La Liga for Atletico, who got an unconvincing win at Betis.

The Spanish midfielder slid in at the back post to meet a low cross from Sime Vrsaljko to score the only goal of the match in the 30th minute, netting for the second game in a row.

Atletico, who were eliminated from the Champions League on Tuesday after a 1-1 draw at Chelsea, were without talismanic forward Antoine Griezmann and had only two shots on target and 26 percent of possession.

Diego Simeone’s side survived a huge penalty appeal for a shove by Angel Correa on forward Cristian Tello shortly before Saul’s goal while Atletico goalkeeper Jan Oblak pulled off an impressive save from former Barca forward Tello in the home side’s best attempt of the second half.

“Today we had very few chances and we were much more efficient. Our play was good, the result was better,” said Atletico coach Diego Simeone.

“Betis forced us to play three different systems to get more comfortable on the pitch. The good thing is that we are tactically versatile and showed our defensive strength.”

Midfielder Koke added: “Betis play spectacular football but we took advantage of the one shot we had and that’s football. We had a very intense week with our trip to London and it was important we won today so we can stay near the top.”

City prove the ‘Barca way’ can work in England – Guardiola