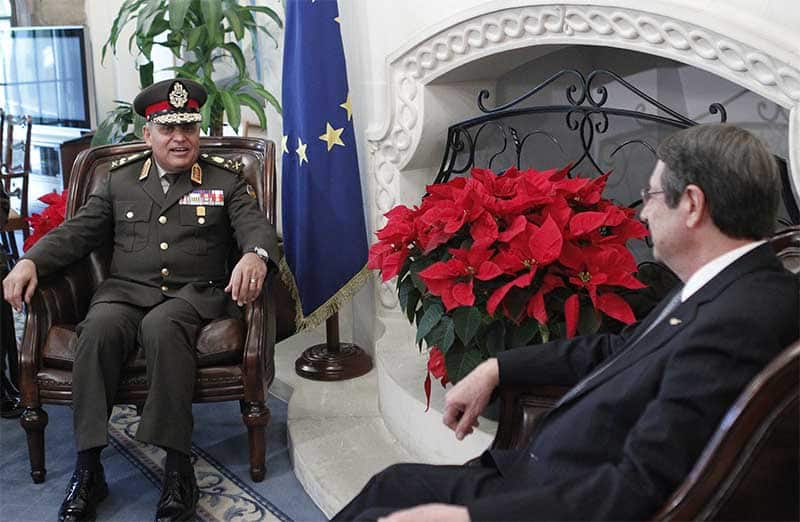 Defence Minister Christoforos Fokaides said on Tuesday that Egypt plays a key role as regards security not only in the Middle East, but also in the Arab world and in Africa, stressing that the two ministries will continue to enhance their cooperation in 2018.

He was speaking after talks held in Nicosia with his Egyptian counterpart Sedki Sobhi, with whom he signed a Memorandum of Cooperation on aeronautical research and rescue.

Sobhi, who is paying an official visit to Cyprus, said the two countries’ defence ministries aim to continue their cooperation, coordination and deliberations, stating their talks focused on the strategic security situation in the Middle East given the multiple crises, tensions and armed conflicts in the region and the subsequent increase of challenges and threats to the two countries’ security and stability.

“We focused on common threats and ways of cooperation in order to address them, and more specifically on terrorism, extremism and illegal immigration, as well as on ways to safeguard our countries’ interests in the Eastern Mediterranean region,” he said.

Fokaides highlighted the importance of the two countries’ strategic cooperation in the fields of defence and security, and noted their joint effort to promote stability and security in the broader region in this unstable area.

He also expressed Nicosia’s firm position within the EU that Egypt must be supported in a more tangible way, noting that Egypt has a pivotal role to play in addressing the issues of terrorism, migration, maritime and energy security in the Eastern Mediterranean and stability in the region.

He noted Cyprus’ concerns over the latest developments in Jerusalem and reiterated Nicosia’s position that the city’s status must be determined in the framework of negotiations among the interested parties.

The defence minister also expressed Cyprus’ support to the Egyptian people in their struggle to address extremist terrorism and underlined that the relations between Cyprus and Egypt will continue to be upgraded.

On Thursday Fokaides, Sobhi and Greek Minister of National Defence Panos Kammenos will participate in the first trilateral meeting of the defence ministries of Cyprus, Greece and Egypt in Nicosia.

Sobhi also met President Nicos Anastasiades and House President Demetris Syllouris, discussing the promotion of peace and security in the region with the latter.

Syllouris referred to the role of Cyprus as a bridge between the EU, Egypt and the Middle East.

EU to agree extending economic sanctions on Russia till mid-2018