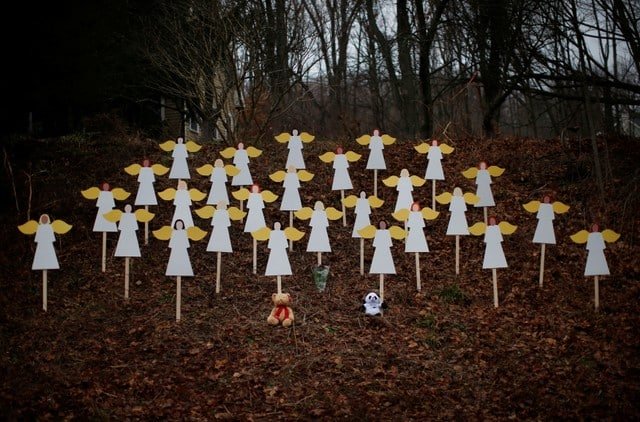 Twenty-seven wooden angel figures are seen placed in a wooded area beside a road near the Sandy Hook Elementary School for the victims of a school shooting in Newtown, Connecticut

Five years after a gunman killed 20 children and six adults at a Connecticut elementary school, advocates who are disappointed with the failure of efforts to limit access to firearms are changing their strategy.

Instead of pressuring lawmakers to push new gun-control measures through the US Congress, volunteers from groups including Moms Demand Action for Gun Sense in America are now running for office themselves.

Nine of 13 volunteers trained by the group ran for office this year and won seats, ranging from New Hampshire state representative to city council member in West University Place, Texas. Fourteen more have already declared their intentions to run for office in 2018, seeking seats in Congress, state legislatures and local government, all running as Democrats.

“The reality is that the work doesn’t really start in Congress. That’s where it ends,” said Moms Demand Action founder Shannon Watts, who launched her group the day after the Dec 14, 2012, massacre at Sandy Hook Elementary School in Newtown, Connecticut.

The group began training candidates after more than 400 of its 70,000 members said they were interested in running for office.

“This is a marathon, not a sprint,” Watts said. “It’s going to take several election cycles.”

Even if the next class of candidates, none of whom are running as Republicans, succeed in winning office, they will face an uphill battle against a US Congress controlled by Republicans, who are staunch defenders of the right to bear arms protected by the Second Amendment of the US Constitution.

Sandy Hook was at the time the second-deadliest mass shooting carried out by a single gunman in US history. It sparked new energy among gun-control advocates who pushed for fresh federal restrictions on assault weapons, which were blocked by Republican lawmakers and the powerful National Rifle Association lobby.

A steady stream of mass shootings have continued across the United States since Sandy Hook, including two deadlier incidents – the slaughter of 58 people at a Las Vegas concert in October and the massacre of 49 people at an Orlando gay nightclub last year.

Mark Barden, whose son Daniel was among the 20 first graders killed in Newtown, said he believes grass roots achievements like the new crop of gun-control candidates will lead to more action.

“This is a social change and it takes time,” Barden said. “What’s happening in Congress notwithstanding, the change is going to come from the ground up.”

In the meantime, Barden is working with Sandy Hook Promise, a volunteer effort to prevent more shooting deaths. The group said that in the past two years it has trained 2.5 million students and families to recognise signs of potential gun violence and report them to authorities.

Social change, whether it is about drunk driving or recycling, comes from the ground up, said Nicole Hockley, whose 6-year-old son Dylan died in the Sandy Hook attack.

“In the gun violence prevention movement, we have not focused on getting behavioral change. It’s all been focused on top-down and that is not how you get change,” she said.

Next year’s class of gun-control candidates includes a mother whose son was shot dead and a bystander paralyzed from the middle of her chest down in a drive-by shooting.

Lara Kennedy is running for US House of Representatives in the Texas district that encompasses Austin and north of San Antonio.

Lucy McBath, whose only child Jordan Davis was shot dead after an argument over music while parked in Florida in 2012, is running for the Georgia House of Representatives.

In Arizona, Jennifer Longdon, who was wounded in a random 2004 shooting, also is seeking to become a state representative. In Arkansas, Adrienne Kvello is challenging incumbent Republican state Representative Charlie Collins, who sponsored bills to put more guns on college campuses, in courthouses and the state capitol.

Amber Gustafson, a gun-owning Moms Demand Action volunteer and life-long Republican who switched her party registration to Democrat last year, said if she wins her race for an Iowa state Senate seat, she will fight for gun safety laws aimed at preventing another Sandy Hook.

Russia will keep bases in Syria ‘to strike at terrorists’