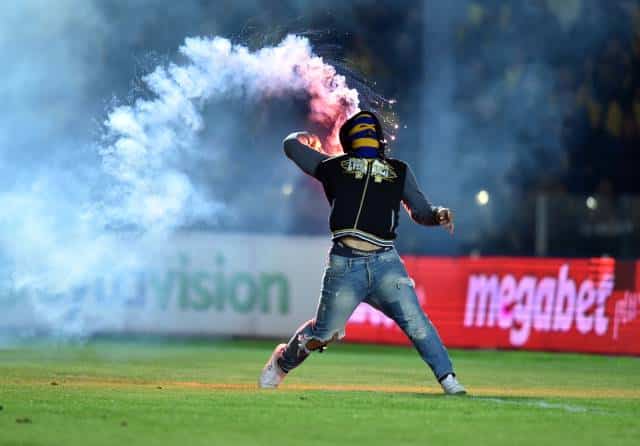 Police have arrested a 17-year-old male for possession of a knife following Monday night’s clashes at a first division football match in Limassol that caused the fixture’s interruption for close to two hours.

On Tuesday the Tsirion stadium, where local team AEL and Nicosia side Apoel eventually played out a goalless draw, resembled a battleground with rocks, pieces of glass and concrete, glass alcohol bottles, flares, firecrackers and other objects strewn on the track that surrounds the field where rival fans clashed.

Toilets were destroyed and plastic seats set on fire on both stands, wire mesh glass windows were smashed with blood droplets revealing the perpetrators were injured in their effort to break it.

Stadium authorities said fans broke pieces off the concrete terraces and hurled them onto the ground.

Tsirion officials said the cost of the damage to the ground had not yet been estimated.

It all started in the 39th minute when Apoel fans, who occupied the west stand, hurled a firecracker which injured a 14-year-old ball boy who fell to the ground.

He was rushed to hospital where preliminary examinations did not find anything. The boy was referred to an ear, nose and throat specialist for further tests.

The game was interrupted for around 20 minutes, with referee Demetris Mashias and the players heading to the dressing rooms.

When it restarted, AEL fans started throwing flares and other objects and then clashed with APOEL supporters on the track behind the south goal.

Riot police intervened to disperse the fighting fans, as match officials and players headed for the dressing rooms for the second time.

Mashias decided after around an hour to go on with the fixture whose remaining 45 minutes were played before empty stands after the majority of fans departed thinking it would be abandoned. During the departure, police arrested the 17-year-old for possession of a knife and rioting. He was expected to be brought before a court later Tuesday.

A 54-year-old who jumped off a wall in a bid to escape the trouble broke his left ankle.

Police said three patrol cars and four other vehicles were damaged during the trouble and a shop window was smashed.

Justice Minister Ionas Nicolaou described the affair as a disgrace and spoke of people who just go to football games to create trouble.

He also took a shot at main opposition Akel, which has been fighting against the introduction of a fan card that authorities expected to help curb hooliganism.

“Since 2014, the government has proposed a package of measures to tackle violence and certain people, even today, do not want enforcement of these measures in their entirety,” he said.

As long as fans cannot be identified, as the fan card is designed to do, mob rule will continue, he said.

“Let everyone consider their responsibility. The CFA should review the measures and reflect. Fan movement should not be allowed. What we saw yesterday was a disgrace.”

Police deflected criticism over the ease with which fans carried flares and other dangerous objects through the entrances.

Spokesman Andreas Angelides said stewards were responsible for checking for such objects but the force was concerned about the matter.

So far this year 41 fans have been banned from attending fixtures but more needed to be done and not just by the police, Angelides said

In a statement issued on Tuesday, Apoel condemned the violence, urging the football association, clubs, and the state to put the necessary measures in place to save the sport.

“In other countries, they have found the solutions to get rid of violence. Why can’t we do the same on an island of one million inhabitants?”

The club said it will discuss the incident during a board meeting on Wednesday in an effort to identify what actions it could take to tackle the problem.

“What remains is one more black page. Surely we cannot erase it but at least let it be the last one,” the club said.