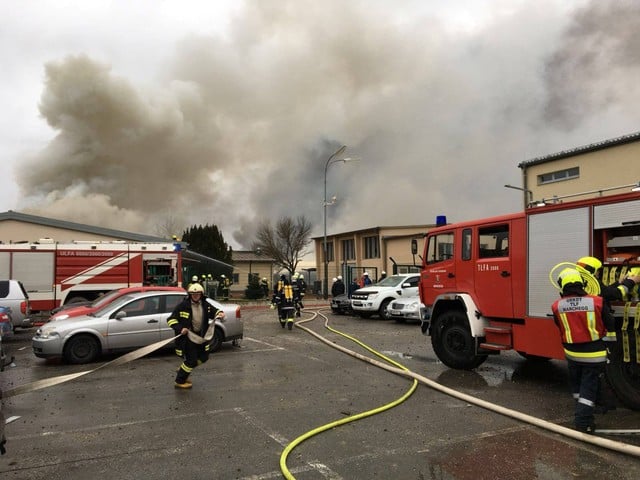 Emergency crews are seen attending to a fire after reports of a gas explosion in Baumgarten, Austria

An explosion and fire that ripped through Austria‘s main gas pipeline hub on Tuesday killed one person and injured at least 18 others, prompting Italy to declare a state of emergency as flows from the strategic site were cut off.

The Baumgarten site in eastern Austria, near Slovakia, is a major regional transfer node, taking natural gas from as far away as Russia and pumping it towards neighbours including Germany and Italy, its biggest recipient.

News of the blast sent gas prices in Europe soaring on fears it would restrict supply as winter sets in.

Gas Connect Austria, which operates site, said the hub had been shut down but the blaze had been brought under control. The cause appeared to be a technical fault, it said.

“An explosion occurred this morning before 9:00 am (0800 GMT) on the grounds of the Baumgarten Natural Gas Station,” the company said. “The explosion caused a serious fire that has been contained to several small fires.”

Footage on social and other media showed a column of fire in the distance rising from a flat landscape. A wide area around the site was cordoned off.

The fire brigade, police and Gas Connect Austria said one person had been killed. A fire brigade spokesman said 18 people were injured, one of them seriously, while a police spokesman put the number of injured at 21.

Gas Connect Austria said its deliveries to Austria‘s southern and southeastern borders were affected by the blast until further notice. Those pipelines supply Hungary, Slovenia and Croatia but also Baumgarten’s biggest recipient, Italy.

That dependence on its gas led Italy to declare a state of emergency on Tuesday as its industry minister said the country had a “serious” energy supply problem.

A state of emergency would give Rome the right to use a series of extraordinary measures such as allowing coal and oil power plants to fire at full blast.

The Italian wholesale day-ahead price surged 150 per cent to €60 euros per megawatt-hour, its highest recorded level.

“On the basis of the information currently available, supplies could resume today if the first indications on the absence of damage to transport infrastructure are confirmed,” it said.

Gas Connect Austria said only that Austrian authorities would conduct a damage assessment at Baumgarten as soon as it was safe and it said supplies would resume as soon as possible.

In Britain, Europe’s biggest gas market, gas for immediate delivery soared 40 percent to 95 pence per therm, a level not seen since 2013.

A UK National Grid spokesman said there was sufficient gas supply to meet demand amid multiple outages, underlining the breadth of concern about supply after the Baumgarten blast.