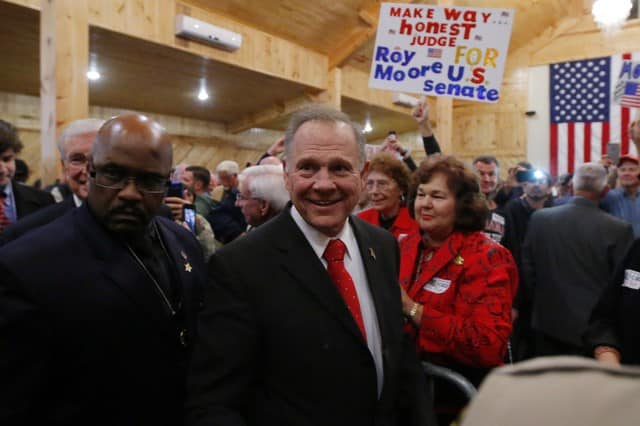 Voters in Alabama were headed to the polls on Tuesday in a hard-fought US Senate race in which President Donald Trump has endorsed fellow Republican Roy Moore, whose campaign has been clouded by allegations of sexual misconduct toward teenagers.

Moore, 70, a former Alabama Supreme Court chief justice, is battling Democrat Doug Jones, 63, a former US attorney who is hoping to pull off an upset victory in the deeply conservative Southern state.

Polls open at 7 am (1300 GMT) in the Alabama special election for the seat vacated by Republican Jeff Sessions, who became US attorney general in the Trump administration.

The Alabama contest has divided the Republican Party.

Trump has strongly backed Moore, but several other Republicans, including Senate Majority Leader Mitch McConnell, have distanced themselves from the candidate.

Moore has been accused by multiple women of pursuing them when they were teenagers and he was in his 30s, including one woman who said he tried to initiate sexual contact with her when she was 14. Moore has denied any misconduct. Reuters has not independently verified any of the accusations.

On the eve of Tuesday’s election, Moore was joined on the campaign trail by Steve Bannon, Trump’s former chief strategist and an executive at the right-wing Breitbart News site.

Bannon framed the Alabama election as a showdown between establishment elites and populist power and excoriated Republicans who declined to support Moore.

“There’s a special place in hell for Republicans who should know better,” Bannon said.

Moore has made conservative Christian beliefs a centerpiece of his campaign and sought to energize evangelicals in Alabama. He has said homosexual activity should be illegal and has argued against removing segregationist language from the state constitution.

Without mentioning Moore by name, Republican former Secretary of State Condoleezza Rice, an African-American who grew up in Alabama, issued a statement on Monday calling the special election “one of the most significant in Alabama’s history.”

She urged Alabama voters to “reject bigotry, sexism, and intolerance.”

A Fox News Poll conducted on Thursday and released on Monday put Jones ahead of Moore, with Jones potentially taking 50 percent of the vote and Moore 40 percent. Fox said 8 percent of voters were undecided and 2 percent supported another candidate.

An average of recent polls by the RealClearPolitics website showed Moore ahead by a slight margin of 2.2 percentage points.

No Democrat has held a US Senate seat from Alabama in more than 20 years. In 2016, Trump won the state by 28 percentage points over Democrat Hillary Clinton.

Jones has touted a record that includes prosecuting former Ku Klux Klan members responsible for the 1963 bombing of a black church in Birmingham, Alabama, in which four girls were killed.

He spent the past week rallying African-Americans, the most reliably Democratic voters in the state, and hammering Moore in television ads. He has told supporters that his campaign is a chance to be on the “right side of history for the state of Alabama.”

If Jones wins on Tuesday, Republicans would control the Senate by a slim 51-49 margin, giving Democrats much-needed momentum ahead of the November 2018 congressional elections, when control of both chambers of Congress will be at stake.

Moore’s campaign has cast Jones as a liberal out of step with Alabama voters, seizing on the Democrat’s support of abortion rights.

Moore, who was twice removed from the state Supreme Court for refusing to abide by federal law, may find a chilly reception in Washington if he wins. Republican leaders have said Moore could face an ethics investigation if Alabama voters send him to the US Senate.

Democrats have signaled they may use Moore’s election to tar Republicans as insensitive to women’s concerns at a time when allegations of sexual harassment have caused many prominent men working in politics, entertainment, media and business to lose their jobs.

Russia will keep bases in Syria ‘to strike at terrorists’