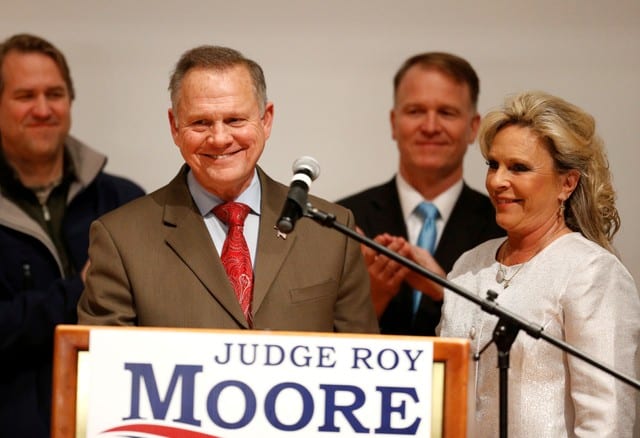 Democrat Doug Jones won a bitter fight for a US Senate seat in deeply conservative Alabama on Tuesday, dealing a political blow to President Donald Trump in a race marked by sexual misconduct accusations against Republican candidate Roy Moore.

The stunning upset makes Jones the first Democrat elected to the US Senate from Alabama in a quarter-century and will trim the Republicans’ already narrow Senate majority to 51-49, endangering Trump’s agenda and opening the door for Democrats to possibly retake the chamber in next year’s congressional elections.

With 99 percent of the vote counted, Jones had a lead of 1.5 percentage points over Moore. But the Republican refused to concede, telling supporters in Montgomery that votes were still coming in and state law would trigger a recount if the margin was within half a percent.

In a CNN interview, Alabama Secretary of State John Merrill said it was “highly unlikely” that anything would change the election outcome. “The people of Alabama have spoken,” he said.

The ugly campaign drew national attention and split the Republican Party following accusations by several women that Moore sexually assaulted or pursued them when they were teens and he was in his 30s.

Moore, 70, a Christian conservative twice removed from the state Supreme Court in Alabama for ignoring federal law, denied the allegations and said he did not know any of the women who made them. Reuters has not independently verified them.

Trump endorsed Moore even as other party leaders in Washington walked away from him, but Jones, 63, a former federal prosecutor, portrayed the campaign as a referendum on decency and promised the state’s voters he would not embarrass them in Washington.

“I have always believed that the people of Alabama have more in common than divides us,” Jones told cheering supporters at his Birmingham victory party, where Lynyrd Skynyrd’s ‘Sweet Home Alabama’ had blasted from loudspeakers earlier.

“We have shown the country the way we can be unified,” said Jones, who as a US attorney prosecuted members of the Ku Klux Klan for the 1963 bombing of a Birmingham church that killed four little girls.

Jones, who cast himself on the campaign trail as the candidate who could reach across the aisle and get things done in Washington, said Alabama had often taken the wrong road when it came to a crossroads.

Jones is expected to take office early in January, after the results are certified. His election will not effect the pending votes in Congress on a tax overhaul or government funding.

Senate Republican leader Mitch McConnell had called on Moore to drop out of the race and other Senate leaders had suggested he should be expelled if elected.

The sexual misconduct allegations against Moore came at a time when many powerful men, including Trump, have faced similar accusations. Democrats had promised to try to link many Republican candidates in next year’s elections to Moore, and use the issue to appeal to women and suburban voters.

The network exit polls found 54 percent of voters said the sexual allegations against Moore were not important to their vote, while 41 percent said they were.

“Part of the problem with this campaign is we’ve been painted in an unfavorable light,” Moore told supporters in Montgomery who sang Christian hymns while waiting for his speech.

Trump had recorded robo-calls to voters to bolster turnout for Moore, and held a campaign rally across the border in Florida last week. Trump’s former senior adviser, Steve Bannon, appeared at two rallies with Moore down the stretch.

Trump tweeted his congratulations to Jones, saying, “A win is a win. The people of Alabama are great, and the Republicans will have another shot at this seat in a very short period of time. It never ends!”

David Lockwood, 37, a designer from Nashville, Tennesee, who watched the race on the news drove down to Birmingham Monday to see the finish.

“I just had to see it,” he said. “I believe this race has national implications and that it’s totally about Trump, 100 percent. I feel this is a victory for the national Democrats.”

John Laine, 65, a retired book editor from Birmingham who backed Jones, said he thought many Republicans crossed over and voted for a Democrat “maybe for the first time in the lives. My cousin said she had to hold her nose and vote Democrat.”

He added, “The reason is that people just couldn’t stomach any more of Roy Moore.”

Former Democratic President Barack Obama recorded robo-calls for Jones to help turn out African-American voters, who, network exit polls said, constituted about 30 per cent of the electorate on Tuesday.

Social and material deprivation rate in Cyprus stands at 21%