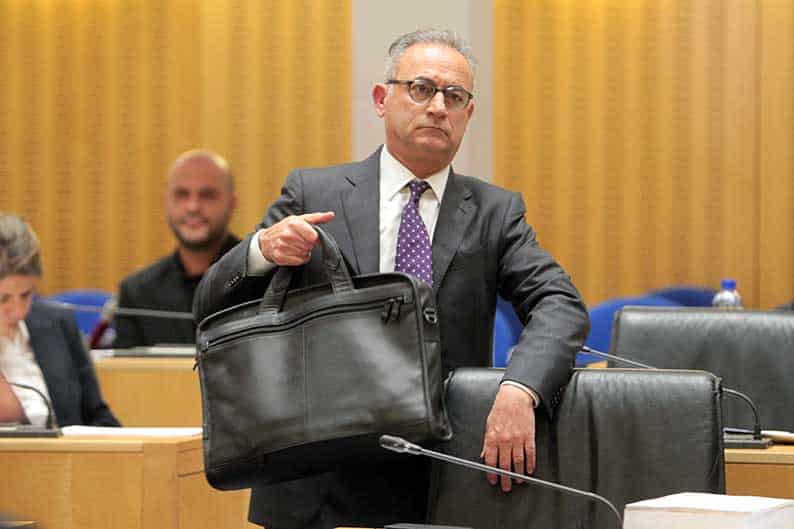 The state budget for 2018 was approved on Wednesday night after three days of debate in parliament.

It garnered 30 votes in favour from Disy, Diko and Solidarity Movement each with 18, nine and three votes respectively.

The state budget for 2018 provides for €7.53bn in expenditure of which the largest chunk will go towards staff, budgeted at €2.62bn.

The budget provides €1.9bn for transfers, including social benefits and €825mn for operating expenses as well as €496mn for debt servicing expenses.

It outlines €7.72bn in revenue of which the main sources will be income taxes, estimated to amount to €3.1bn and direct taxes at €2.2bn.

The budget surplus is €177m and a primary surplus (excluding debt servicing costs) is estimated to be €733.6m

Finance Minister Haris Georgiades, exiting parliament after the session expressed his satisfaction with the vote and praised the deputies’ handling of the matter.

“It is a budget that ensures stability, a budget without burdens and taxes like those we had in the past but on the contrary, with margins and provisions for new projects and new policies that our country needs.”

Akel and the Greens voted against the budget in its entirety while Citizens Alliance, Edek, Elam and Mylonas voted in favour only for the funds budgeted for defence and the National Health Scheme (Gesy).

The vote began shortly after 6pm and lasted over an hour as deputies voted on 65 amendments tabled by opposition.

These include a seven per cent across the board cut on funds budgeted for studies and consultations covering privatisations.

An amendment tabled by Diko, Edek, Citizens Alliance, Solidarity, Greens and Mylonas to cut funds to create tourism and development sub-ministries was rejected by Akel and Disy. Two positions of under secretary for the two sub-ministries were also not passed.

Parties also decided to cut 10 per cent from funds set to go towards staff training, conferences and seminars.

Certain items in the budget were frozen which will now require the House finance committee’s written consent before the money can be used.

These include €3.5m for vehicles for state officials, funds for Tseri avenue roadworks and the €38m state contribution to the Agricultural Insurance Organisation.

Any funds required for Gesy will require the briefing of the House finance committee every six months.

A €55m education ministry budget for benefits was also frozen, as were €2.08mn for foreign consultants on Cyprus’ hydrocarbons and natural gas ambitions.

A €10m budget for relief on provident funds that were subject to a haircut was also frozen.

With 53 votes against, deputies also rejected an amendment tabled by the Greens and Mylonas to freeze €1.5m on the construction of a new floor in parliament’s current building.

The discussion prompted comments from House President Demetris Syllouris who said freezing the sum would delay the project with two to three months.

“We have a spokesperson and we do not know where to put him. We have people in tiny offices that are sitting on paperwork.”

According to finance ministry forecasts, the growth rate will be around three per cent of real GDP while the fiscal balance for 2018 is projected to improve to 1.3 per cent of GDP.

The primary budget balance excluding debt servicing costs is projected to be a surplus at around 3.8 per cent of GDP.

Deputies also voted in favour of regulations that will determine which items of land will be subject to a 19 per cent VAT tax.

Passed with 31 votes in favour, three against and 17 abstentions, it will come into force as of January 2 next year and concerns imposing the tax on undeveloped building sites, subject to parliament regulations as opposed to a Cabinet decree.

Parliament also approved the government guarantee of €1.3m for a Yermasogia municipality loan to fund a new road.

Discussions on the budget began on Monday with MPs making speeches that concluded on Wednesday afternoon.

Wednesday’s session was the last before Christmas and the House will not sit again until after the presidential elections in January.

‘We will never again tolerate fighting between thugs’