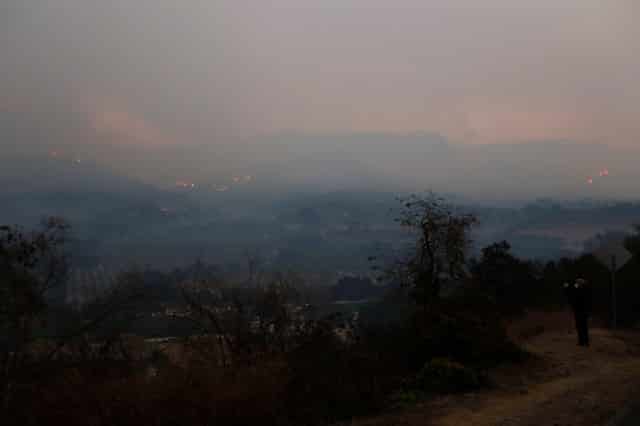 A resident takes pictures as wildfire flames burn on a hillside at sunrise during the Thomas fire near Montecito, California

An out-of-control California wildfire that has already destroyed nearly 700 homes in its path of destruction crept closer to the upscale hillside community of Montecito on Tuesday despite calmer winds that slowed its progress.

The Thomas Fire, which broke out on Dec. 4 near the community of Ojai, has since traveled 27 miles (43 km) to become the fifth-largest blaze in state history. It has blackened more than 368 square miles (953 square km) in Ventura and Santa Barbara counties, an area larger than New York City.

Officials said that while the conflagration charred another 2,500 acres overnight, a break in the hot, dry Santa Ana winds on Tuesday sapped its forward momentum and allowed crews to prevent further damage to homes.

“It’s doing what we want it to do. The fire is staying away from the homes,” said Captain Steve Concialdi of the California Department of Forestry and Fire Protection. The flames were 25 percent contained as of Tuesday evening.

Concialdi said that some of the 7,000 firefighters deployed against the blaze had taken advantage of the better weather to set controlled burns in a canyon near the community of Carpinteria and near homes in an effort to further deprive the flames of fuel.

The National Weather Service has warned that the Santa Ana winds could return as early as Wednesday, meaning that the fire remains dangerous and unpredictable.

In Washington, members of the House of Representatives met with Vice President Mike Pence to discuss the crisis. Representative Julia Brownley, whose district includes Ventura, said all resources had arrived to fight the blaze, which could take another week to contain.

In Carpinteria, Michelle Warner, who has lived in the seaside town her whole life, and her toddler daughter wore face masks to protect them from the thick smoke. Thanks to the firefighters’ efforts, Warner, a 45-year-old writer, said she had no plans to evacuate.

“We plan to stick it out for at least another day, hoping that conditions will get better,” she said.

The Thomas Fire has so far destroyed 904 structures, including 691 homes. Efforts to combat the flames, which have displaced more than 94,000 people, have cost more than $48 million.

Many public schools in Santa Barbara and school districts nearby have canceled classes this week and will not reopen until the annual winter break is completed in January.

Some of the other fires burning over the past week in San Diego and Los Angeles counties have been largely brought under control by the thousands of firefighters on the ground.

The Los Angeles Fire Department said on Tuesday that investigators had determined that the Skirball Fire, which destroyed six homes in the posh Bel-Air community of the city, was started by a cooking fire at a homeless encampment underneath a freeway.

Our View: Banks should be covering their own losses, not the state