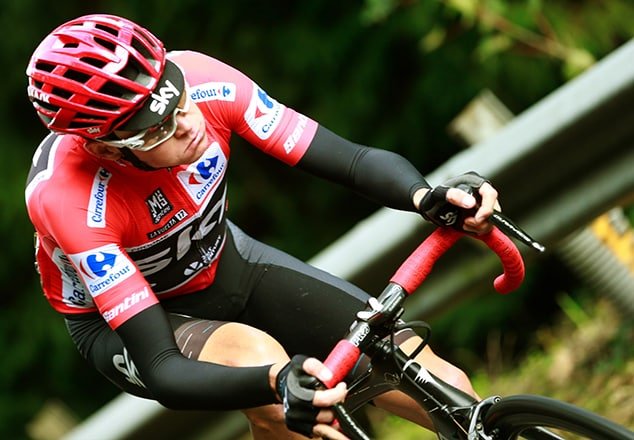 Four-time Tour de France winner Chris Froome could potentially be stripped of his Vuelta a Espana title after a urine test he gave during the race in September showed excessive levels of an asthma medication.

The 32-year-old Briton, who rides for Team Sky, says he has done nothing wrong and would provide “whatever information” world cycling’s governing body UCI requires.

Froome became the first British rider to win the Vuelta and the first man to claim a Tour de France/Vuelta double in the same season since the Spanish race was moved to after the Tour.

Regarded as one of the greatest cyclists of all time, Froome has been on a shortlist of favourites to win this month’s BBC Sports Personality of the Year award for the first time.

His spectacular year is now under a cloud, however, and he and his Sky team will need to convince the UCI that there was nothing sinister about the amount of Salbutamol that showed up in his urine sample after Stage 18 on Sept. 7.

Salbutamol is permitted as a legal asthma drug by the World Anti-Doping Agency (WADA), and the UCI said Froome’s failed urine test did not necessitate a mandatory provisional suspension.

But riders have been banned for excessive use of it in the past, notably Italian Alessandro Petacchi who was given a 12-month ban and stripped of his five stage victories in the 2007 Giro d’Italia.

The UCI said in a statement it had notified Froome on Sept. 20 of an ‘Adverse Analytical Finding” from his sample, which had double the permissible limit of Salbutamol.

‘I TOOK THE GREATEST CARE’

Team Sky issued a statement in which Froome said he had followed medical advice and taken an increased dosage of his medication after his asthma, a condition he has suffered with throughout his career, became worse during the race.

“As always, I took the greatest care to ensure that I did not use more than the permissible dose,” Froome said.

“I take my leadership position in my sport very seriously. The UCI is absolutely right to examine test results and, together with the team, I will provide whatever information it requires.”

Earlier this year Froome, who prides himself on racing clean, said he had refused a therapeutic use exemption (TUE) to treat his asthma on the way to winning the 2015 Tour de France.

The UCI said analysis of the rider’s B sample from the Vuelta test had confirmed the results of the A sample and proceedings were being conducted in line with its anti-doping rules.

In Petacchi’s case, the Court of Arbitration for Sport (CAS) found the Italian rider had not intended to cheat but that he had not exercised “utmost caution” in the use of his asthma treatment.

Limited levels of Salbutamol are permitted by WADA rules without the need for a TUE.

Sky said analysis of Froome’s sample showed the presence of the treatment at a concentration of 2,000 nanograms per millilitre (ng/ml), compared with the WADA threshold of 1,000ng/ml.

Team Sky said in a statement that the notification of the test finding did not mean any rule had been broken, saying there were a range of “complex medical and physiological issues” that could have led to the result.

“I have the utmost confidence that Chris followed the medical guidance in managing his asthma symptoms, staying within the permissible dose for Salbutamol. Of course, we will do whatever we can to help address these questions.”

The revelation comes at the end of a year in which Team Sky have been dogged by allegations of ‘wrongdoing’ over its use of TUE’s and its medical record keeping after the ‘jiffybag’ controversy at the Criterium du Dauphine race in 2011.

An investigation by UK Anti-Doping concluded recently, saying it had been unable to prove what was in the package sent to former rider and 2012 Tour de France winner Bradley Wiggins.