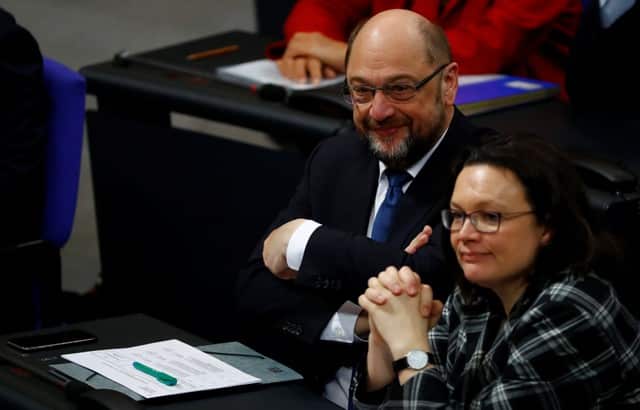 Germany‘s Social Democrats said on Wednesday they would share power with Angela Merkel’s conservatives only if ordinary voters get a fairer deal, seeking to reassure party sceptics hours before highly-sensitive talks between the two camps.

Merkel, weakened by heavy losses to the far-right in a September election and then by the collapse last month of talks on a three-way alliance, is pinning her hopes on the SPD for a fourth term as chancellor and to avoid new elections.

But the mood between the two parties is sour and Merkel herself has been a frequent target of criticism by the Social Democrats.

The SPD, stung by its worst election result since 1933 and riven by divisions on whether to work with Merkel after voters punished the party for sharing power with her over the last four years, warned a deal would not be made at any price.

“A decisive point for the SPD is that the social agenda has more prominence in Germany,” leading Social Democrat Carsten Schneider told German television.

“We are quite clear: There must be a greater degree of fairness for ordinary heroes,” he said.

Merkel and the leader of her Bavarian conservative allies were due to meet SPD leader Martin Schulz later on Wednesday.

The secrecy surrounding the talks underlined their sensitivity. With both sides having a lot to lose, the parties have not disclosed the time or venue for the meeting and do not plan to make public statements when it ends.

Schulz has made a pitch for EU integration leading to a United States of Europe by 2025, and the SPD wants a big spending boost on education, more nursery spots and a big healthcare reform to help “ordinary people”.

The SPD had vowed to go into opposition after its dismal election result and only softened its approach, agreeing to meet Merkel, due to pressure from President Frank-Walter Steinmeier, who wants to avoid new elections.

The SPD pulled no punches in attacking Merkel during the election campaign. Schulz has described Merkel, known for pragmatism rather than vision, as a vacuum cleaner of ideas and has also accused her of silencing debate on issues.

A row last month over a conservative minister breaking protocol to back an extension for an EU licence for a weed-killer despite SPD opposition hurt ties at a crucial time.

One of the SPD’s deputies, Ralf Stegner, adopted a combative tone on Wednesday, saying nobody could dictate the terms to the SPD as the conservative bloc needed the party to rule.

Some in the SPD are prepared to contemplate another grand coalition, albeit with a clear SPD signature, but others prefer the idea of tolerating a minority government under Merkel.

One other option is a “KoKo” (cooperation coalition) agreement under which the SPD would agree to work with Merkel in some areas, such as a budget and European and foreign affairs, but force her to seek ad hoc majorities for other policies.

This idea is unpopular with conservatives who want a grand coalition. “We have to try it – but please, seriously,” Carsten Linnemann, head of a group representing small and medium-sized businesses in the conservative bloc, told ARD television.

Plant of the week: Festive plant once used in elixir of life