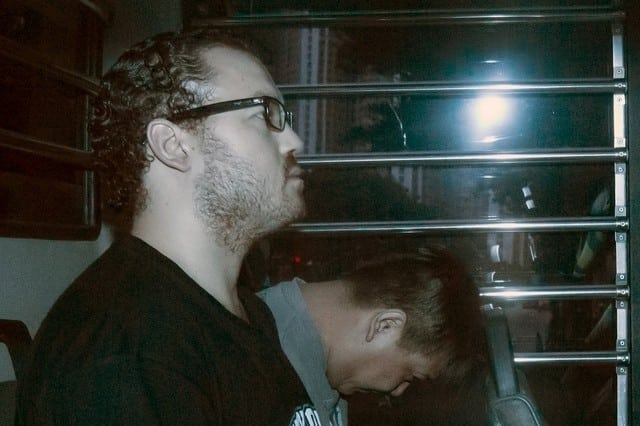 British former banker Rurik Jutting, sits in a prison bus as he arriving at the Eastern Law Courts in Hong Kong

Three judges in Hong Kong‘s Court of Appeal are set to decide the fate of a former British banker who was jailed for life last year for the murder of two Indonesian women he tortured and raped after his appeal hearing closed on Wednesday.

Rurik Jutting, 32, a former Bank of America employee, had denied murdering Sumarti Ningsih, 23, and Seneng Mujiasih, 26, in his luxury apartment in 2014 on the grounds of diminished responsibility due to alcohol and drug abuse and sexual disorders.

The Cambridge-educated Jutting pleaded guilty to the lesser charge of manslaughter in a case that gripped the Asian financial hub.

During the one and a half day appeal hearing in the former British colony, Jutting’s lawyers said the judge who presided over the gruesome trial last year had misdirected the jury.

Defence lawyer Gerard McCoy argued that the judge had narrowed down the scope of the defence case by conflating an abnormality of mind with a psychiatric disorder.

Jutting’s defence is that while a disorder can cause an abnormal mind, his mental state can be abnormal without a disorder.

McCoy said Jutting showed severe traits of psychiatric disorders, far beyond the normal range and was therefore not in control of his actions, said McCoy.

“Abnormality of mind is absolutely not confined to a disorder or a disease. Here the judge locks it down, reinforcing to the jury it is disorder,” he said.

Jutting, dressed in a navy blue shirt and thick squared glasses, watched animatedly throughout the hearing and occasionally chuckled, particularly during the presentations by prosecutor John Reading.

Reading stated that the previous judge had “exercised considerable care in crafting his directions on the law in consultation with both sides”.

Judges Michael Lunn, Andrew Macrae and Kevin Zervos are to return judgement on the appeal which may include granting Jutting the opportunity for a new trial, but they did not give a time frame.

Deputy High Court Judge Michael Stuart-Moore said in strongly worded closing remarks at the end of the trial last year that the case was one of the most horrifying the Chinese-ruled territory had known.

He described Jutting as the “archetypal sexual predator” who represented an extreme danger to women, especially in the sex trade, and cautioned that it was possible he would murder again if freed.

The jury unanimously found Jutting, the grandson of a British policeman in Hong Kong and a Chinese woman, guilty of murder and he was sentenced to life in prison in November 2016.

Jutting’s defence team had previously argued that cocaine and alcohol abuse, as well as personality disorders of sexual sadism and narcissism, had impaired his ability to control his behaviour.

The prosecution rejected this, stating Jutting was able to form judgements and exercise self-control before and after the killings, filming his torture of Ningsih on his mobile phone as well as hours of footage in which he discussed the murders, bingeing on cocaine and his graphic sexual fantasies.

In previous high profile murder cases such as that of Nancy Kissel, an American woman serving a life sentence for the “milkshake” murder of her Merrill Lynch banker husband, retrials have been given.

Kissel lost her final appeal against her conviction in 2014.