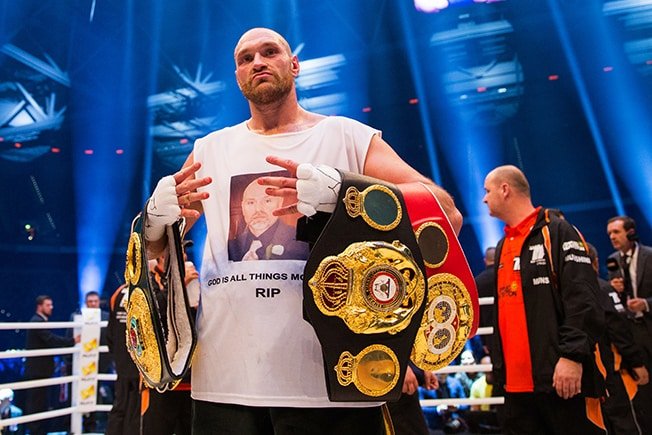 Tyson Fury's last fight was two years ago when he beat Wladimir Klitschko to claim the WBA, IBF and WBO heavyweight titles

Former world heavyweight champion Tyson Fury said he was glad the ‘nightmare’ was behind him as he was cleared to resume his boxing career after agreeing a two-year backdated ban for an anti-doping violation.

UK Anti-Doping (UKAD) said in a statement that Fury, who was charged with the offence in June 2016 after testing positive for a banned steroid in February 2015, completed his ban at midnight on Tuesday.

Fury, whose last fight was two years ago when he beat Wladimir Klitschko to claim the WBA, IBF and WBO belts, blamed the failed test on eating uncastrated wild boar.

UKAD and the British Boxing Board of Control said Fury is free to fight again once he regains his boxing license.

A second charge against Fury over his “alleged failure to provide a sample in September 2016” has been withdrawn.

The 29-year-old Tyson, who has a 25-0 record, issued a statement saying he would reclaim the title.

“I’m a fighting man through and through and I’ve never backed down from anyone in my life and I was certainly not going to back down from fighting this dispute,” he said.

“Hughie and I have maintained our innocence from day one and we’re now happy that it has finally been settled with UKAD and that we can move forward knowing that we’ll not be labelled drug cheats.

“I can now put the nightmare of the last two years behind me. Next year I will be back doing what I do best, better than ever and ready to reclaim the world titles which are rightfully mine. It’s time to get the party started.”

Fury vacated his titles and his boxing license was suspended in October 2016 pending investigation after he admitted to consuming cocaine and dealing with mental health issues.

UKAD said in a statement that a compromise had been reached.

“In recognition of the retrospective counter-arguments and the risks inherent in the dispute resolution process, each side has accepted a compromise of its position,” UKAD said.

“The proceedings have therefore been resolved on the following basis: the anti-doping rule violations based on the reported presence of elevated levels of nandrolone metabolites are upheld.”

While a controversial figure, Fury’s return and a possible title fight with British world champion Anthony Joshua would be a mouthwatering prospect for the division.

Joshua defended his world titles in October, while the other two world belts are held by American Deontay Wilder and New Zealand’s Joseph Parker.

Fury was quick to take to Twitter, calling out his fellow Briton. “Where you at boy? I’m coming for you punk,” he said.