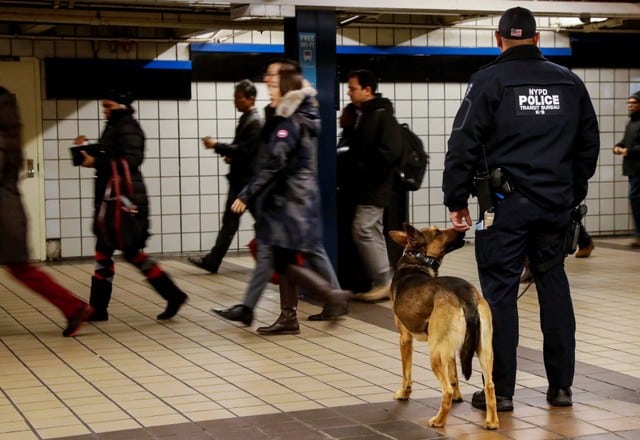 A New Yotk City Police (NYPD) K-9 unit stands in the subway corridor, at the New York Port Authority subway station near the site of an attempted detonation the day before, during the morning rush in New York City

Bangladesh has found no evidence linking a Bangladeshi man charged with an attempted suicide bombing in New York with militants in Bangladesh, its counter-terrorism chief told Reuters on Wednesday.

US prosecutors on Tuesday brought federal charges against Akayed Ullah, a 27-year-old Bangladeshi and self-described supporter of Islamic State, accusing him of supporting a foreign terrorist organisation.

Ullah set off a pipe bomb in an underground pedestrian corridor between New York‘s Times Square and the Port Authority Bus Terminal at rush hour on Monday morning, injuring himself and three others.

“We have collected evidence and information from his family members: his wife, father-in-law and mother-in-law,” Monirul Islam, head of the Bangladesh police’s counter-terrorism unit, said in an interview.

“In Bangladesh we have not found any connection or have not been able to identify any of his associates who were or are involved with any terrorist groups.”

A US enforcement official familiar with the investigation of the attack said officers had found evidence that Ullah had watched Islamic State propaganda on the internet.

Islam and his team interviewed Ullah’s wife and other relatives for several hours, after picking them up at their rented apartment in central Dhaka.

Ullah, a US resident since 2011, had come back to Bangladesh to see his family in September, spending most of the time at home with their six-month-old son, Islam said.

“Usually, he did not mix with any of his friends or relatives here. Most of the time he spent time in the house,” Islam said.

Members of the family declined to talk to Reuters when approached at the apartment on Wednesday.

Islam said Bangladesh had passed on information on Ullah to US security agencies, although there was no joint investigation.

“I’m not sure whether they will send any formal request for an investigation or inquiry. If they do, we’ll comply with the request because we’ve given highest priority on this issue because we have a zero-tolerance policy against terrorism.”

Ullah’s relatives were under surveillance and would not be allowed to leave Dhaka without police permission. None has a passport.

Both Islamic State and al Qaeda have claimed several attacks in Bangladesh over the past few years, the most notable being the murder of 22 people, most of them foreigners, in an upmarket restaurant in Dhaka last year.

Analysts have said Islamic State could try to radicalise young men in Muslim-majority Bangladesh as the organisation faces reversals in places such as Syria and Iraq.

But Islam said Ullah’s was an isolated incident and Bangladesh would act decisively against any such activity, wherever it occurred.

“If any Bangladeshi national is involved in any such activity we’re ready to deal with it with utmost strictness,” he said.

Return of the Pantheon