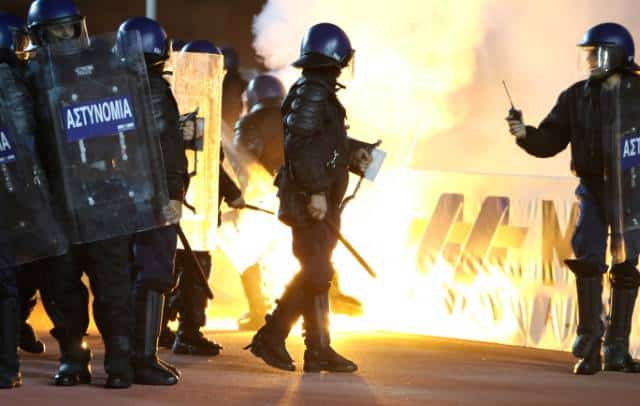 A 28-year-old man who was arrested on Wednesday evening in connection with Monday night’s football clashes in Limassol was remanded in court for one day.
He was detained after he was identified on one of the photos police circulated at noon on Wednesday.
The suspect denied any wrongdoing when he was questioned.
Violence broke out at Limassol’s Tsirion stadium on Monday night where Ael and Apoel eventually played out a goalless draw. Rocks, bottles, flares and other objects were thrown by rival fans. Equipment was damaged, at least two people were injured and the match was interrupted several times.
One 17-year-old was arrested leaving the stadium for carrying a knife. He has been charged and released from police custody and banned from matches until his court appearance.
Amid the usual recriminations over the outbreaks of violence at sports venues, the police on Thursday said it should be the last to shoulder blame.
In a statement, the police said it has already arrested two persons and is seeking six more suspects in connection with Monday’s football game.
In a bid to underline that the police are not negligent in their duties, the statement went on to cite arrest statistics for the past five years.
From 2013 to the present day, a total of 439 persons have been placed under arrest in connection with sports violence. Of these, 171 have been banned from sports venues by court decision.
“Incidents of hooliganism have been limited, and this is due to the decisive action of the police. This year we have had the least injuries to civilians and police officers. We call on all involved parties to work with us in order to avert similar incidents in the future,” the statement read.

Gonna go back in time