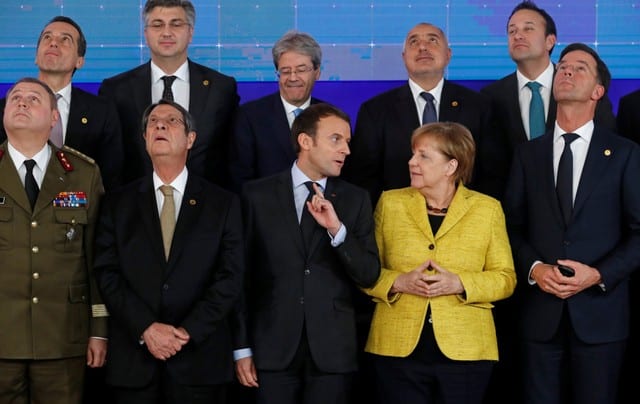 European Union nations, now unfettered by Britain’s decision to quit, achieved a 70-year-old ambition on Thursday to integrate their defences, launching a pact between 25 EU governments to fund, develop and deploy armed forces together.

First blocked by the French parliament in the 1950s and later by Britain, which feared creation of an EU army, the pact aims to end the squandering of billions of euros by splintered defence policies.

It is also aimed at lowering Europe’s heavy reliance on the United States.

“More than half a century ago, an ambitious vision of the European Defence Community was created but what was missing was the unity and courage to put it into practice,” Tusk, who chairs EU summits, said of the failed 1950s attempt.

“The dream was at odds with reality. Today this dream becomes reality,” he said in a speech in front of EU leaders and military personnel from each of the 25 countries involved.

Denmark, which has an opt out from EU defence matters, and Malta, were the only EU countries not to sign up, along with Brexiting Britain. 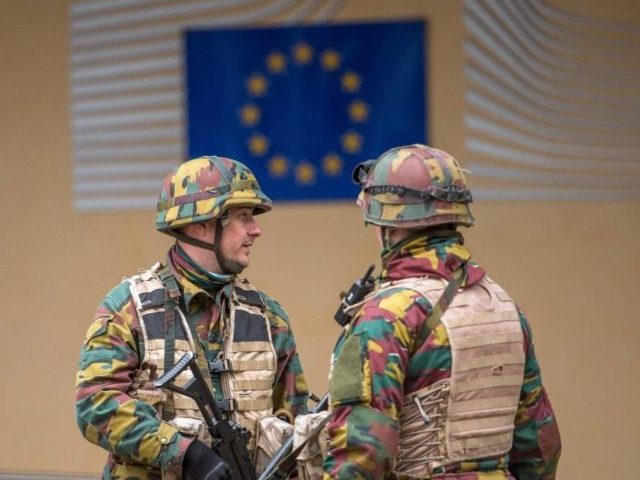 The pact, called Permanent Structured Cooperation, or Pesco, is meant as a show of unity and a tangible step in EU integration, diplomats said, particularly after Britain’s decision to leave.

Caught off guard by Russia’s Crimea annexation in 2014 and facing threats ranging from state-sponsored computer hackers to militant attacks, EU governments say the pact is justified by EU surveys showing most citizens want the bloc to provide security.

EU governments proved unable to act as a group in the 1990s Balkan wars and relied on US-led Nato to stop the bloodshed on their doorstep.

In Libya in 2011, a Franco-British air campaign ran out of munitions and equipment and was again forced to turn to the United States, in what is considered an enduring embarrassment for the EU, a major economic power.

US President Donald Trump’s criticism of low European defence spending, a host of divisions on foreign policy, and Trump’s warnings to allies that they could no longer rely on the United States if they did not pay up, have also played a role.

“It’s sad that we needed Donald Trump to give us a boost, but whatever, it is the right outcome,” said former German foreign minister Joschka Fischer, who as minister backed Nato’s intervention in Kosovo in 1999 but opposed the 2003 Iraq war.

Unlike past attempts at European defence integration, Nato backs the project, but Nato Secretary-General Jens Stoltenberg, who attended part of the summit, warned against duplication. Twenty-two EU countries are also members of Nato.

“There has to be coherence between the capability developments of Nato and the European Union. We cannot risk ending up with conflicting requirements from the EU and from Nato to the same nations,” he told reporters.

“Forces and capabilities developed under EU initiatives also have to be available for Nato because we only have one set of forces,” Stoltenberg said.

Issues remain about financing future EU missions. An EU defence fund, with money from the European Commission for the first time, still needs to be approved, although a pilot phase is already underway for defence research.

In one irony noted by EU diplomats, British Prime Minister Theresa May, who attended the summit, was left seeking a way into the project now that it was an actuality.

A 1998 Anglo-French EU defence accord is considered the genesis of Thursday’s agreement. In a possible compromise on Pesco, Britain may be able to join in later on, but only on an exceptional basis if it provides funds and expertise.

Britain and France, both nuclear-armed, are Europe’s two biggest military powers, and in 2010 set up a Combined Joint Expeditionary Force to cement long-standing ties in defence.

“We do face a number of threats across Europe,” May said. “I’m very clear that although the British people took a sovereign decision to leave the EU, that does not mean that we were going to be leaving our responsibilities in terms of European security,” she told reporters