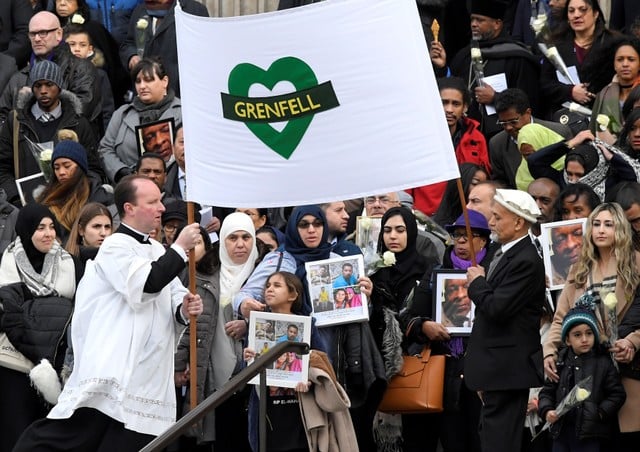 Mourners pay their respects outside St Paul's Cathedral after a memorial service in honour of the victims of the Grenfell Tower fire, in London

Survivors of a blaze that killed 71 people six months ago in the Grenfell Tower social housing block in west London joined firefighters and members of the royal family at a national memorial service at St Paul’s Cathedral on Thursday.

The fire broke out in the middle of the night on June 14 and quickly gutted the 24-storey building, which was home to a close-knit, multi-ethnic community living in a poor area within one of London’s richest boroughs, Kensington and Chelsea.

The disaster profoundly shocked Britain, highlighting extreme disparities in living conditions between rich and poor and fuelling a debate over why safety concerns voiced by tower residents before the fire had been ignored.

“Today we remember with sorrow, with grief, with tears,” Graham Tomlin, Bishop of Kensington, told the congregation.

“Today we ask why warnings were not heeded, why a community was left feeling neglected, uncared for, not listened to.

“Today we hold out hope that the public inquiry will get to the truth of all that led up to the fire at Grenfell Tower … and we trust that the truth will bring justice.”

Police are investigating the fire and say charges may be brought against individuals or organisations. A separate public inquiry is under way on the causes of the fire and the authorities’ response.

The devastation inside Grenfell Tower was such that it took police and forensic scientists several months to recover and identify all human remains. The final death toll was 53 adults and 18 children.

The service began when a white banner bearing a large green heart emblazoned with the word “Grenfell” was carried through the congregation to the pulpit by a Catholic priest and Muslim cleric from the area around the charred tower.

Later, a young Syrian musician played a mournful tune on the oud, an instrument commonly played in the Middle East and parts of Africa, where many Grenfell residents had ties. A choir of Muslim girls who had participated in local vigils also performed a song.

A recording was played of voices of survivors and members of the local community describing their experiences on the night of the fire and in the following days and months, including expressions of anger at the authorities.

Many of those in the cathedral wept as they listened.

Members of Kensington and Chelsea council, which owns Grenfell Tower and has been widely criticised for its actions before and after the fire, were asked not to attend the service because survivors and bereaved families did not want them there.

Hundreds of people displaced by the fire are still staying in hotels six months later as the council has so far been unable to permanently rehouse them.

Council leader Elizabeth Campbell has said it was doing everything it could to secure quality homes for affected families, but members of the Grenfell community have complained of a slow, confusing process.

Undersecretariats for tourism and development are a long way off