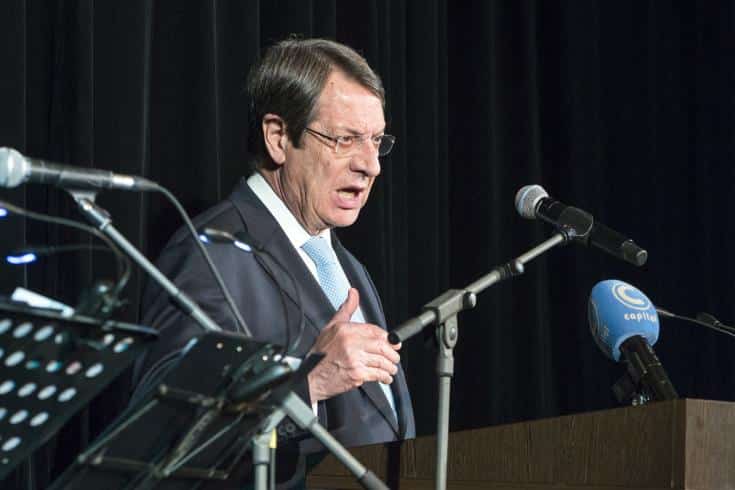 President Nicos Anastasiades told the EU summit in Brussels that Turkey’s cooperation with the Republic of Cyprus (RoC) is imperative in tackling migration, Deputy Government Spokesman Victoras Papadopoulos said on Friday.
According to Papadopoulos, the president informed EU leaders during discussion on the bloc’s migration policy on Thursday evening, that Turkey does not cooperate with the RoC on the issue of the external management of migration.
“He also denounced Turkey’s behaviour in the region, and explained that non-settlement of the Cyprus problem does not provide the possibility for peace and stability in the eastern Mediterranean,” Papadopoulos said.
Anastasiades reiterated that a just solution to the Cyprus problem should be one without guarantees of intervention rights, and without any foreign troops, especially the occupying Turkish troops.
Greek Prime Minister Alexis Tsipras also stressed the importance of the settlement of the Cyprus problem with regard to security in the EU’s southeastern border.
The wider region, Tsipras said, is plunging into destabilisation, thus support for the south-eastern European borders is becoming increasingly important for Europe’s own security as well as for the management of the influx of refugees that seek to enter the EU.
“At the same time, the security challenges in the eastern Mediterranean make the need for a viable solution to the Cyprus problem even more urgent, certainly in the context of UN resolutions and without Turkish guarantees,” Tsipras said.
Following a meeting of Anastasiades and Tsipras on Thursday for the Greek prime minister to brief the president on the outcome of his talks with Turkish leader Recep Tayyip Erdogan last week, the government announced that Nicosia and Athens are in complete sync in so far as any new conference on Cyprus should be preceded by thorough preparation.
The two leaders agreed that Nicosia and Athens will continue their close contact and will coordinate on any future steps concerning the Cyprus problem.
Meanwhile, Turkish Cypriot daily newspaper Star Kibris reported on Friday that Turkish Prime Minister Binali Yildirim said following a meeting with British Foreign Secretary Boris Johnson that it is ‘too late’ to revive the Cyprus issue,
Yildirim reportedly told Johnson that Turkey wants a lifting of embargoes on Turkish Cypriots and for both sides to discuss things as equal partners, otherwise the Cyprus issue will not be resolved.

Number of crossings to north increases in 2017