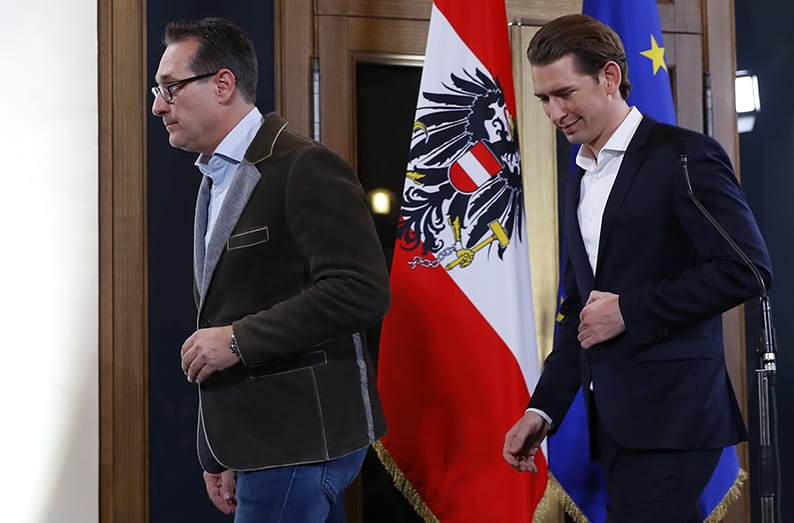 Austria is set to become the only western European country with a far-right party in government after the anti-immigration Freedom Party and Sebastian Kurz’s conservatives struck a coalition deal they plan to present on Saturday.

Kurz, who is just 31, and Freedom Party (FPO) leader Heinz-Christian Strache announced on Friday night they had reached an agreement. They said they would announce its contents on Saturday afternoon after meetings with Austria’s president and obtaining formal approval from their party leaderships.

Austria’s parliamentary election two months ago was dominated by Europe’s migration crisis, in which the country took in a large number of asylum seekers.

Kurz’s party won with a hard line on immigration that often overlapped with the FPO’s, pledging to cut benefits for refugees and never to allow a repeat of 2015’s wave of arrivals. The FPO came third with 26 percent of the vote.

“If everything goes as we imagine it will, nothing stands in the way of the future government being sworn it at the start of the coming week,” President Alexander Van der Bellen, whose powers include appointing and dismissing governments, said after meeting Kurz and Strache on Saturday morning.

Van der Bellen beat a far-right candidate in last year’s close-fought presidential election with a pro-European platform. His defeated opponent is likely to join the next government, though ministerial appointments have yet to be announced.

Kurz and Strache will present their agreement at 4 p.m. on the Kahlenberg, a hill overlooking Vienna famed as the site of the 1683 Battle of Vienna, which ended a siege of the city by Turkish forces.

While there has been no specific mention of repelling that Muslim invasion, the symbolism is clear for two parties that have warned Muslim “parallel societies” are emerging in Austria.

Of Austria’s 8.7 million people, more than half a million are Muslim, mostly Turkish or of Turkish origin. There are few obvious signs of sectarian tension and the country has been spared large Islamist militant attacks like those of Paris, Brussels and Berlin.

Strache and Kurz say they want to make fighting radical Islam a priority. Both also oppose Turkish membership of the EU, which polls regularly show most Austrians agree with.

The coalition deal ends more than a decade in opposition for the FPO, a party founded by former Nazis in the 1950s and once led by the late Joerg Haider, who praised Hitler’s employment policies and brought the party mainstream electoral success.

More recently, anti-establishment parties have been winning over more voters in Europe, capitalising on dissatisfaction with mainstream politicians’ handling of the economy, security and immigration.

While other far-right parties have gained ground this year, entering parliament in Germany and making France’s presidential run-off, the FPO is going further by entering government and securing key ministries.

A person familiar with the talks said before Friday’s announcement that the FPO was poised to secure the interior, foreign and defence ministries.

Unlike France’s National Front, the FPO has backed away from calling for a referendum on leaving the European Union, but Kurz has still secured a guarantee that there will be no Brexit-style referendum in Austria, a person familiar with the talks said.

Both parties want to make it possible to call referendums by petition. Click here for other policies the OVP and FPO have agreed on during coalition talks:

Kurz has repeatedly said his government will be pro-European, though both his party and the FPO believe the EU should focus on fewer tasks, like securing its external borders, and hand more power back to member states.

When the FPO last entered government in 2000 other EU countries imposed sanctions on Vienna in protest. There is unlikely to be a similar outcry this time, given the rise of anti-establishment parties across the continent.

“We want to reduce the burden on taxpayers … and above all we want to ensure greater security in our country, including through the fight against illegal immigration,” Kurz said after the deal was reached on Friday.

An orchestra goes all out for Christmas